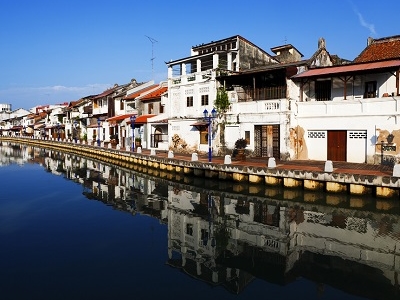 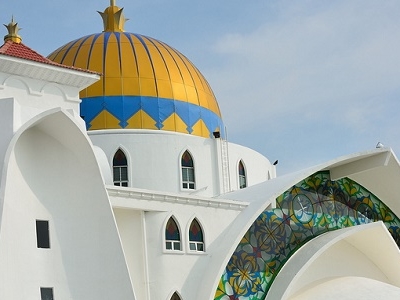 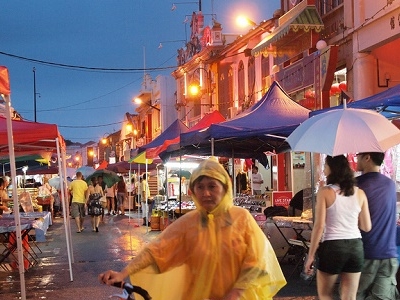 Malacca City is the capital city of the Malaysian state of Malacca. The Seri Negeri, the State Administrative and Development Centre which houses the Chief Minister's Office, the State Secretary's Office and the Legislative Assembly Hall is located in Malacca City. It was listed as a UNESCO World Heritage Site together with George Town of Penang on 7 July 2008.

Malacca is the driest city in Malaysia which receives just below 2,000 mm (79 in) of rainfall annually beside Sitiawan, Perak while mostly in Peninsular of Malaysia the average rainfall is around 2,500 mm (98 in) annually. However Malacca never has a dry season as average rainfall is more than 100 mm (3.9 in) for each month.

Geography
The city of Malacca is located on both sides of the Malacca River near its mouth into the Strait of Malacca. The historic central area of the city is located near the old coastline, includes St Paul's Hill with the ruins of the Portuguese fortress, A Famosa and the Dutch Square on the right (eastern) bank of the river, and the old Chinatown on the left (western) bank. The modern city has grown in all directions from this historic core, including to the south (because the present coastline of the Strait of Malacca is somewhat further down to the south than its original location due to land reclamation). The "Chinese Hill" (Bukit Cina), where a large old Chinese cemetery is located, was formerly located to the northeast of the town, but now is surrounded by the city on all sides. Malacca river winding its way through the old town and the city centre.

Tourism
Most tourist attractions are concentrated in its small city centre which encompasses Jonker Walk which houses Malacca's traditional Chinatown that exhibits Peranakan architecture. A Famosa Fort, St. Paul Hill are among the tourist attractions located in the Bandar Hilir, old city area. There are also numerous shopping centres located nearby. The Malacca Straits Mosque is located here. There are numerous islands which include Pulau Upeh near Klebang Beach (currently undergoing reclamation works) and Pulau Besar.

Transportation and Access
Currently Malacca City is accessible via highway, railway, or Federal route/coastal road. Malacca City is approximately 130 km from Kuala Lumpur and 200 km from Singapore. People who wish to go to Malacca by train should board the Singapore-bound train in Kuala Lumpur Sentral and alight at Tampin station, where shuttle buses to and from places such as Jonker Street, Melaka Sentral and AEON Bandaraya Melaka Shopping Centre are available.

It was reported recently that under the 10th Malaysia Plan (RMK10), KTM is planning to reconnect the railway line from Tampin to Malacca City then Batang Melaka. The station will probably be in Batu Berendam (near the airport) or Melaka Sentral. There was a railway line from Tampin to Malacca City before World War II but was dismantled by the Japanese troops to build the infamous Death Railway in Burma. The railway line was never re-built after the British returned.

Here's the our members favorite photos of "Cities in Malacca". Upload your photo of Malacca City!

Going to Malacca City? Get answers from our friendly locals