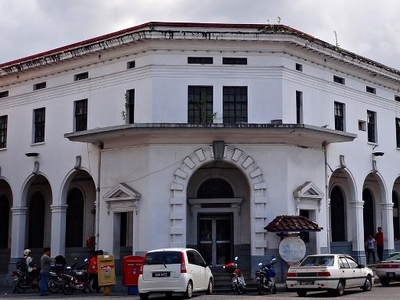 The Main Post Office on Jalan Tun Haji Openg is another good example of Kuching's cosmopolitan architectural mix. Built in 1931, it appears to belong to the early 19th century with its neo-classical style and Corinthian columns.

This majestic building was designed by Denis Santry of Messr. Swan & McClaren Architects (Singapore). Completed in 1932 under Charles Vyner (the third Rajah), the Neo-Classical facades were quite in contrast to the style of buildings favoured by James and Charles Brooke (the first and second Rajah).
The site was once used for a police station and also the Rajah’s Stables. Occupants of the old Medical Headquarters across the road fondly recall looking to the Rajah’s Stables, surrounded by areca palms, to the coach house, hay loft and harness room, and watching the horses being fed, watered & groomed.

Here's the our members favorite photos of "Key Buildings in Kuching". Upload your photo of Main Post Office!

Going to Main Post Office? Get answers from our friendly locals