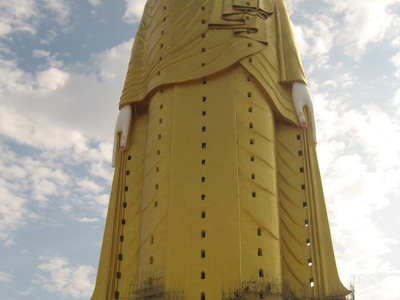 The Laykyun Setkyar is the second tallest statue in the World at 116 metres (381 ft). This statue of Gautama Buddha stands on a 13.5 metres (44 ft) throne located in the village of Khatakan Taung, near Monywa, Myanmar. Construction began in 1996 and was completed on 21 February 2008. It was built by the Chief Abbot Ven. Nãradã, who died on the 22nd of November, 2006.

Here's the our members favorite photos of "Monuments in Monywa". Upload your photo of Laykyun Sekkya!

Going to Laykyun Sekkya? Get answers from our friendly locals