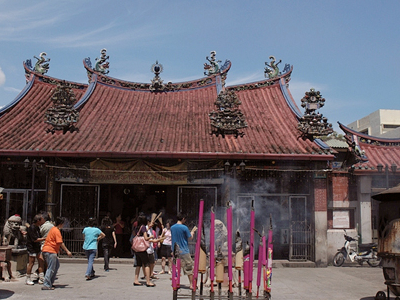 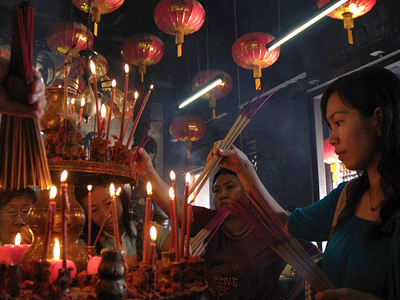 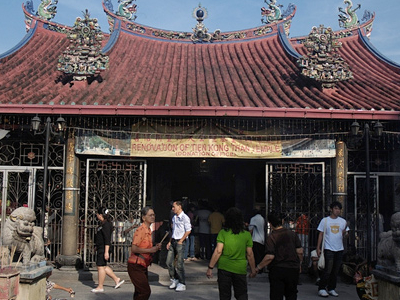 The Kuan Yin Temple was built in the 1800s by early Chinese settlers of the Hokkien and Cantonese communities. The temple was originally named Kong Hock Keong Temple (Cantonese-Hokkien Temple) and was once used not only for religious but also for social functions within the Chinese community. However, the temple lost some of its importance when the current Chinese Town Hall was constructed in the 1880s.

The Goddess of Mercy Temple, or Kuan Yin Temple, is the first temple ever built in Georgetown, Penang, by Chinese settlers. The temple honours Kuan Yin, a devout Buddhist who was said to have attained the coveted state of Nirvana but had chosen instead to remain on earth in order to provide guidance and help to those who are themselves striving to reach Nirvana. The temple interior is usually filled with the scent of sandalwood incense, burnt by devotees who visit the temple to pray and seek guidance from Kuan Yin.
The temple also honours Ma Chor Poh, the patron saint of seafarers, who was highly regarded by the Chinese settlers, many of whom had travelled great distances, crossing the seas from China to Penang.
Enjoy the temple's many beautiful features like the dragon-entwined pillars, carved from a type of green stone, which support the temple's high roof. Also look for the statue of Kuan Yin, located in an inner chamber, which depicts a woman with 18 arms, who has a countenance which exudes inner peace and worldly contentment.
Getting Here:
By Foot or Taxi:
The temple is in Central Georgetown on Jalan Masjid Kapitan Kling (Lebuh Pitt) in between Lorong Stewart and Lebuh Farquhar.
Who To Contact:
Penang Tourist Information Centre
Phone: +604-264 3494/263 4941
Fax: +604-262 3688
Email: mtpbpen@tourism.gov.my

Here's the our members favorite photos of "Temples in George Town". Upload your photo of Kuan Yin Temple (Goddess of Mercy Temple)!