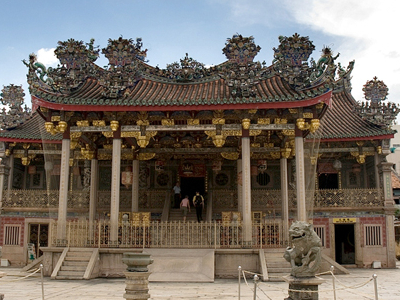 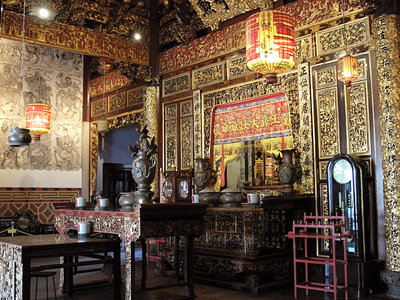 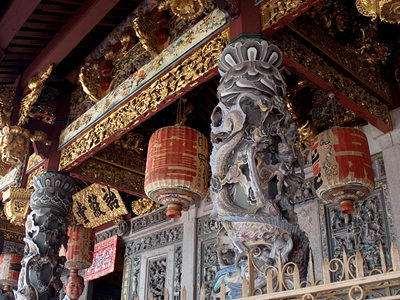 When the first immigrants from the Hokkien province of China arrived in Penang, one of the first things they set out to do was build one of the most magnificent clan houses in Penang. Work began on the clan house in the 1890's which resulted in what was said to be a palace which rivalled that of the Emperor of China. As the story goes, this extravagance incurred the wrath of the Gods and on the first night of the clan house's completion, an unexplainable fire broke out and burnt the house down! It wasn't until 1902 that the current clan house began construction.

One of five clan houses still standing in Georgetown, the Khoo Kongsi clan house takes on a remarkable resemblance to a mini clan village. One of the grandest clan houses in Penang, the Khoo Kongsi features tall thin columns supporting a gently sloping, red tiled roof, topped with carvings of dragons, phoenixes, mythical animals and various scenes from popular Chinese legends.
The clan house also has a grand hall adorned with resplendent and intricate carvings and richly ornamented pillars which are said to have been crafted by master craftsmen from China. Other major Hokkien clan houses that can be found in Penang are the Cheah Kongsi, Yeah Kongsi, Lim Kongsi and Tan Kongsi.
Getting Here:
By Foot or Taxi:
There are two entrances to the Khoo Kongsi. One is on Jalan Masjid Kapitan Kling (Lebuh Pitt), in between Armenian Street and Lebuh Aceh. The second entrance is on Lebuh Pantai, also in between Armenian Street and Lebuh Aceh.

Here's the our members favorite photos of "Towns & Villages in George Town". Upload your photo of Khoo Kongsi!

Going to Khoo Kongsi? Get answers from our friendly locals