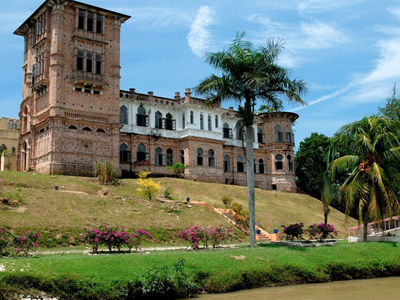 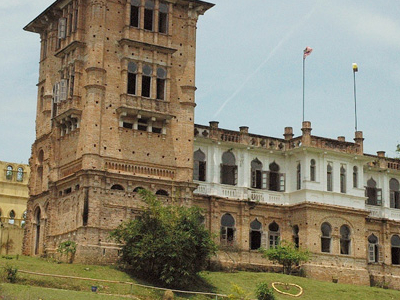 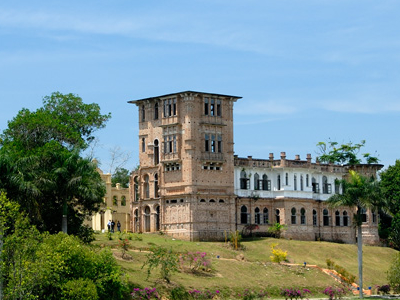 Kellie's Castle (sometimes also called Kellie's Folly) is located near Batu Gajah, and is about 20 minutes' drive from Ipoh, Perak, Malaysia. The unfinished, ruined mansion, was built by a Scottish planter named William Kellie Smith. According to differing accounts, it was either a gift for his wife or a home for his son.
Kellie's Castle was meant to be a home away from home for Scottish Planter, William Kellie Smith in the 20th century. Being far away from home, Kellie desired his new residence to be reminiscent of his home back in Scotland. The castle is perched on top of a hill in what used to be a rubber estate.
William Kellie Smith was an interesting man who was popular with his South Indian workers. Kind at heart, he erected a Hindu shrine for his workers on the castle premises. As a token of appreciation, his workers erected a statue of Kellie complete with a white suit and hat.
Construction of this unique castle began in 1915. However, it came to an abrupt halt with Kellie's sudden death in 1926. The solitary castle, looks almost surreal in these wild plantations of Perak, it projects a strong personality and an aura of mystery.
Recently, efforts have been made by the Perak State Government to rescue this magnificent structure from the encroaching foliage. Besides being haunted, the castle is believed to have hidden rooms and secret underground tunnels.The road that leads to Kellie's Castle follows the contours of the land in a dizzying, maze-like fashion, adding to the mystery and romance of the place.
Getting Here:
By Road:
The castle is situated on the way to Batu Gajah town at the Kinta Kellas Rubber Estate, about a 30-minute drive and 14 km south of Ipoh City.
Who To Contact:
Tourism Malaysia State Office
Phone: +605-255 2772/9962
Email: mtpbperak@tourism.gov.my

Here's the our members favorite photos of "Castles near Batu Gajah". Upload your photo of Kellies Castle!

Going to Kellies Castle? Get answers from our friendly locals