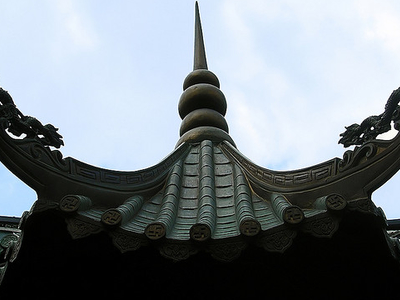 There is also a famous temple complex in Teluk Intan, known as Hock Soon Keong (Hock Soon Temple) dedicated to Mazu. The origins of the temple are unknown, while the main temple building (not the original one) was constructed in 1883, as indicated by a legend painted on the building. Hock Soon Temple was the centerpoint of all Hokkien Chinese in Teluk Intan during the British colonial era. The local Hokkien people would congregate at the temple to solve all problems, from giving aid to the poor to solving fights between clans. The local Hokkien people used to select three local Hokkiens, usually businessmen and famous men to settle their problems. The temple was built with Southern Chinese architecture, the most notable feature being the beautifully decorated upturned eaves. There is also a century old mosque just opposite the temple, which is frequently mentioned as a typical depiction of religious harmony in Malaysia.

Show nearby: Temples near Teluk Intan, Temples in Perak, Places To Visit near Hock Soon Temple

Here's the our members favorite photos of "Temples near Teluk Intan". Upload your photo of Hock Soon Temple!

Going to Hock Soon Temple? Get answers from our friendly locals