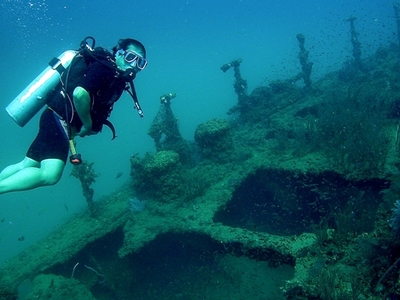 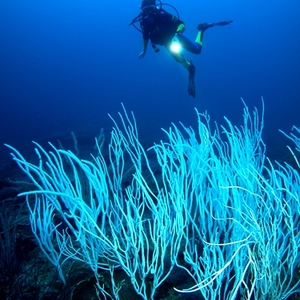 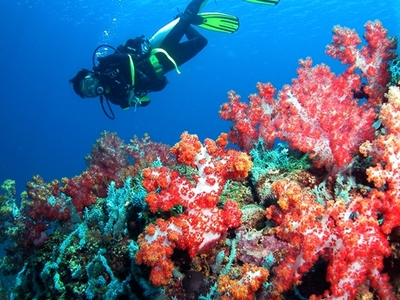 Miri is a popular dive destination due to an abundance of pristine patch reefs. The Miri-Sibuti Coral Reef National Park, lying at depths ranging from 7 to 30 metres has an average visibility of 10 to 30 metres. There are also some interesting wreck dives. The nearest dive site is a mere ten minutes from the marina bay jetty. One can land in Miri and be in water two hours later. Local dive operators offer certification programme as well.  Water temperature at the start of the season is normally 26 to 27ºC but can be as low as 23ºC at depth, as the NE monsoon still brings in cold water from the northern Pacific. By May the water temperature reaches the more normal 29 to 30ºC. The best time to dive is from late March through November each year.

The diversity and accessibility of corals and other marine life on the reefs is amongst the best in the region.  Here are some of them:

Eve's Garden (15 minutes from jetty)
This shallow reef just 7 to 2 meters deep is carpetted with soft corals such as leather corals, elepant’s ear sponges and sees whips.  Giant anemones and clown fishes are all over the reef.  This reef is also characterised by the schooling yellow tail fusiliers and angelfishes.
Anemone Garden (30 minutes from jetty)
In terms of flora and fauna composition, this is one of the most interesting reefs with depth ranging from 0 to 10 meters.  Both hard and soft corals thrive in splendid diversity.  Anemones and their symbiotic clown fishes are found in abundance.  Bubble corals, staghorn corals and the colorful Dendronepthya soft corals.  Other surprises are feather stars, giant clams and nudibranchs, with schooling yellow tails also found in exaggerated numbers.
Belais Reef (30 minutes from jetty)
This site is like an open zoo in the sea; the pelagic - sea fans - large gorgonian fans of over 4 metre span, red, orange, white whip corals, yellow coral trees are found in their own concentration, spread over a 19,000 square meter complex.  Along the 'walkways' are angelfishes, butterfly fishes, sea perch, lizardfish, and nudibranchs.  Jacks and yellow snappers are found in abundance.  Batfishes are also common among the long swaying sea whips or hovering blithesomely over outcrops whilst being serviced by entourage of cleaner wrasse and shrimps.  Reef top is at about 15 metres and the site is absolutely a photographer's heaven.
Tukau Drop-Off (50 minutes from jetty)
This site challenges the senses; the reef starts at about 20 metres and drops quickly to 40 metres; often there is a vertical wall.  Schooling jacks, barracudas, Napoleon wrasse, yellowtail fusiliers, and large groupers are predictably found.
Santak Point (45 minutes from jetty)
Blue water, glass fishes and sea fans are the signature of this site;  with an average visibility of 30 meters or more, the sea fans, large colonies of gorgonian fans of 2-3 metres in size are found all over the top of the reef at 21 metres.  The reef edge drops to 35 meters.
Siwa Reef (35 minutes from jetty)
The most interesting section of this reef is along the lower reef slope where leopard sharks and huge marble rays hang out during the day.  This site is full of surprises in small packages; orange clownfish in purple anemones to several species of nudibranch.
Barracuda Point (45 minutes from jetty)
A reef within a reef; this is a site on Salam reef where a school of 300 large barracudas are predictably swirling in a never ending circle.  At a depth of 25 metres, flatworms, sea horses, symbiotic shrimps and seldom seen nudibranchs are also commonly found.
Sri Gadong Wreck (1 hr 10 minutes from jetty)
This is one of the favourite sites among local divers; resting upright on a 18- metres mud bottom, this small 30-metre cargo ship is renowned for its large resident groupers. The whole wreck is teeming with fish life in entirety. Jacks, yellow grunts, batfish and batfish and barracudas encircling around the wreck while the giant groupers swim in and out of the cargo holds.
Kenyalang Artificial Reef
A decommissioned oil rig, this is the first artificial reef in Malaysia and 2nd in the region.

Here's the our members favorite photos of "Diving Spots in Miri". Upload your photo of Diving in Miri-Sibuti Coral Reef National Park!

Love diving spots? Check these out;