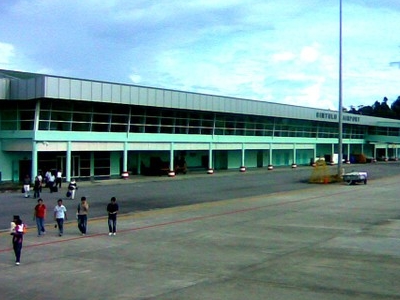 Bintulu Airport (IATA: BTU, ICAO: WBGB) is an airport serving Bintulu, a town in the state of Sarawak in Malaysia. The airport is located 5 km (3.1 mi), 23 km (14 mi) by road, southwest of the city, and although small, it is able to handle planes as large as a Boeing 747. In 2008, the airport handled 417,918 passengers and 16,787 aircraft movements.
History of Bintulu airport began in early 1937 when the British colony built an airfield situated between a river at one end and the sea coast at the other end. Bintulu old airport was open for operation on 1 September 1955, with a grass-surface runway catering for de Havilland DH.89 Dragon Rapide and Scottish Aviation Twin Pioneer aircraft operated by Borneo Airways.
In 1963, bigger types of aircraft such as DC-3 services were introduced. In 1966, the runway was resurfaced with bitumen and the terminal building was also extended to cater for increasing number of passenger. On 1 July 1968, Malaysia-Singapore Airlines introduced scheduled Fokker 27 services into Bintulu. The terminal building and the parking apron was extended in 1981 to accommodate Fokker 50 aircraft.
In September 2005, first low-cost airline in Malaysia, AirAsia started operating in Bintulu airport. FlyAsianXpress (FAX), subsidiary company for AirAsia has taken over major domestic routes linking Bintulu, started its operation on 1 August 2006, until 30 September 2007. On 1 October 2007, Malaysia Airlines subsidiary, MASwings took over the link connecting Bintulu.

Here's the our members favorite photos of "Airports near Bintulu". Upload your photo of Bintulu Airport!

Going to Bintulu Airport? Get answers from our friendly locals