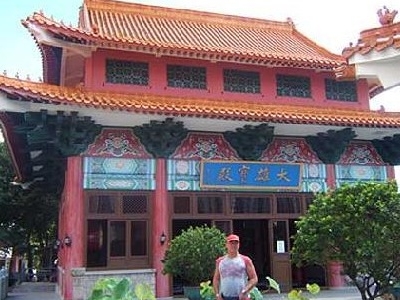 Pou Tai Temple, Taipa Islands, MacauPou Tai Temple is one of the biggest and most beautiful temples in Macau. The temple was founded by Buddhist monks in the 19th century and till today is considered as an important religious place of worship by the scarcely populated Macanese Buddhist community. The prayer hall is decorated with the three precious images of Buddha. Since its establishment, the temple as well as the monastery has been extended and enhanced by devotees.

The temple holds many attractions including the newly built pavilion featuring a high yellow-tile roofs and an impressive statue of Kun Lam that has been placed on a marble-columned terrace. Buddhist monks reside in a building adjoining the temple. Besides offering daily prayers, these monks also take care of a large vegetable garden and even operate a pure vegetarian restaurant.

Here's the our members favorite photos of "Temples near Taipa Islands". Upload your photo of Pou Tai Temple!

Going to Pou Tai Temple? Get answers from our friendly locals