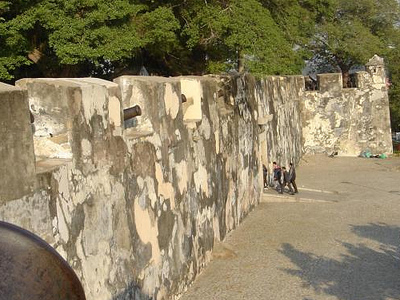 Monte Fort often referred to as St. Paul Monte Fortress was constructed from 1617 till 1626 to defend St. Paul Church from the pirates. One of the oldest forts in Macau, Monte Fort lies to the east of the Ruins of St. Paul's. Quadrilateral in shape, the fort features bastions at each corner and is about 100 meters long on each side. Inside the fort are several barracks, storehouses and cisterns.

The strongly fortified fort has cannons that have lost their military function. A devastating fire in 1838 almost destroyed the entire fort building as well as the Jesuit College and St. Paul's Church. What remains today are the fore wall of the church known as the Ruins of St. Paul's. The fort also houses an ancient bell and in 1998, Macau Museum was also established here.

Here's the our members favorite photos of "Forts in Macau (China)". Upload your photo of Monte Fort!

Going to Monte Fort? Get answers from our friendly locals