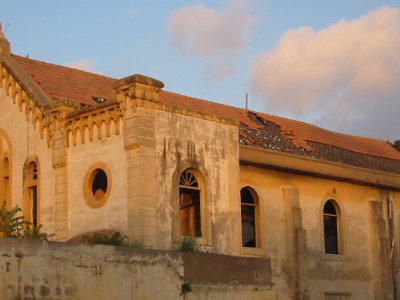 The Maghen Abraham Synagogue, is the oldest synagogue in Beirut, Lebanon. Located in the former Jewish district of Wadi Abu Jamil it was abandoned after Israeli shelling destroyed the synagogue during the Lebanese Civil War. Restoration of the synagogue had begun in May 2009 and as of August 2010, renovations are nearing completion with artists putting finishing touches to the interior of the building.

The synagogue brought about many benefits to the Jewish community in Lebanon during the early twentieth century. It was constructed in 1925 and named after the son of Abraham Sassoon, Moise Abraham Sassoon of Calcutta, on land donated by Isaac Mann. It was designed by the architect Bindo Manham and construction was overseen by Ezra Benjamin and Joseph Balaya." Because of insufficient funding, the head of the Jewish community, Josef Farhi, helped in completing the interior. The synagogue was also used for Torah and scientific lectures, weddings and other festive events.

Here's the our members favorite photos of "Synagogues in Beirut". Upload your photo of Maghen Abraham Synagogue!

Going to Maghen Abraham Synagogue? Get answers from our friendly locals

Terrin Mauricio is the only Touristlink member to visit Maghen Abraham Synagogue. Have you been here? Click here to save it.