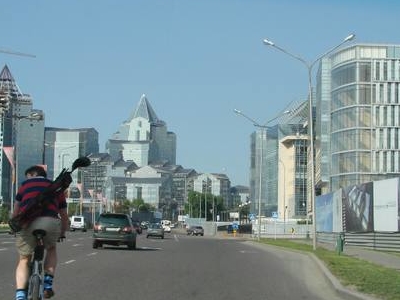 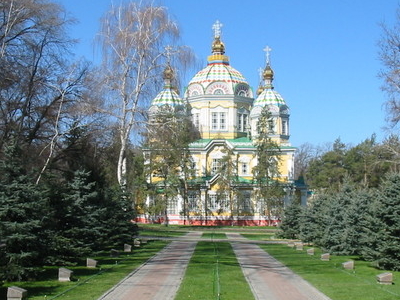 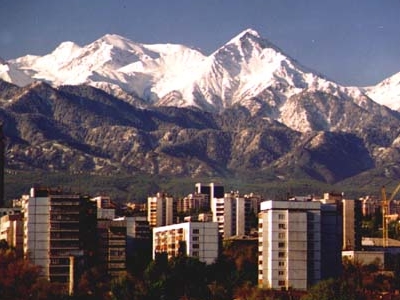 Almaty is the former capital of Kazakhstan and the nation's largest city, with a population of 1,472,866 (at 1 December 2012). This represents approximately 9% of the country's population. Almaty was the capital of the Kazakh SSR from 1929 to 1991 and of independent Kazakhstan from 1991 to 1997. Despite losing its status as the capital to Astana in 1997, Almaty remains the major commercial and cultural centre of Kazakhstan. The city is located in the mountainous area of southern Kazakhstan, near the border with Kyrgyzstan.

Kök Töbe: An aerial tramway line connects downtown Almaty with a popular recreation area at the top of Kök Töbe (Kazakh: Көктөбе, which means 'Green Hill'), a mountain just to the southeast. The city television tower, Alma-Ata Tower, is located on the hill, as well as a variety of tourist attractions, such as amusement-park style rides and restaurants.

Fountains: According to the city's Department of Natural Resources and Resource Use Management, as of 2007 the city has 125 fountain groups or isolated fountains. Among them is the "Oriental Calendar" Fountain, whose 12 sculpture figures represent the 12 animals of the Kazakh 12-year animal cycle (similar to its Chinese counterpart).

Sports
The historic bandy team Dinamo won the Soviet Championships in 1977 and 1990 and the European Cup in 1978. Their home ground was Medeo, where bandy was the only sport at the 2011 Winter Asian Games. Medeo is the main arena at the 2012 Bandy World Championships. The second arena, built for the championships, is an alternative field of Almaty Central Stadium. Federation of International Bandy has opened an office for Asia, which is located in Almaty. It is also home to Almaty United Football club.

Olympic Aspirations
Almaty was a bidder to host the XXII Olympic Winter Games in 2014, but was eliminated from consideration, not making the "short list" of candidate cities. Almaty won its bid to host the 2011 Winter Asian Games. It will be the 2017 Winter Universiade host. The city was exploring possible future bids, such as the 2018 Winter Olympics, but did not actually submit a bid.

Here's the our members favorite photos of "Cities in Almaty". Upload your photo of Almaty City!

Going to Almaty City? Get answers from our friendly locals