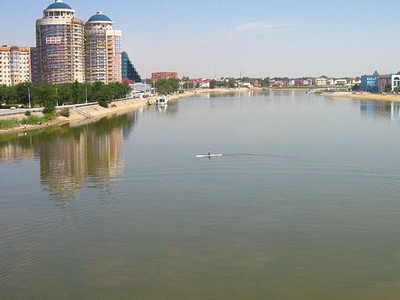 Atyrau, known as Guryev until 1991, is a transcontinental city in Kazakhstan, and the capital of Atyrau Province. It is located at the mouth of the Ural River, 2700 kilometers west of Almaty and 350 kilometers east of the Russian city of Astrakhan. Other transliterations include Aterau, Atirau, Atyraw, Atyraou, Atırav, Atıraw. Modern Atyrau is famous for its oil and fish industries. It has 154,100 inhabitants (2007), up from 142,500 (1999 census), 90% ethnic Kazakhs (up from 80%), the rest being mostly Russians and other ethnic groups such as Tatars and Ukrainians. Since October 2006, its mayor is Salimzhan Naqpayev.

Geography
Atyrau (together with Aktau) is Kazakhstan's main harbour city on the Caspian Sea at the delta of the Ural River. Atyrau city is approximately 20 meters below sea level. The city is considered by many to be located both in Asia and Europe, as it is divided by the Ural River. The city is a hub for the oil-rich Caspian Depression; because of this, many oil wells have been drilled in the Tengiz Field and Kashagan Field areas. An oil pipeline runs from Atyrau to Samara, where it joins the Russian pipeline system. A separate oil pipeline runs from the Tengiz field to the Russian Black Sea port of Novorossiisk.

Oil Industry
The third biggest refinery in Kazakhstan is located in Atyrau. Atyrau Refinery is operated by KazMunayGas and has a capacity of 16,600 m³/day (2012). A deep oil refining complex is under construction which is the final stage of complete reconstruction of Atyrau Oil Refinery. This project is designed to process 2.4 million tons/year of raw materials (oil, vacuum gas oil). The project will increase the depth of the oil processing at the refinery by 2016 to 85%. The volume of oil refining will reach 5.5 million tons per year.

Here's the our members favorite photos of "Cities in Atyrau". Upload your photo of Atyrau City!

Going to Atyrau City? Get answers from our friendly locals