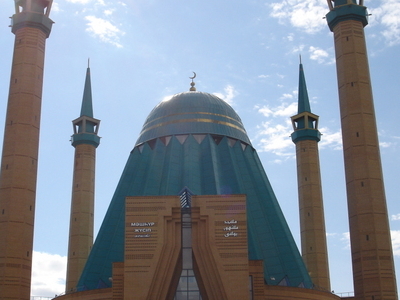 The Almaty Tower was built between 1975 and 1983 in Almaty City, Kazakhstan. The tower is located on high slopes of Kok Tobe mountain (Kazakh: Көктөбе means "green hill") south-east of downtown Almaty.

Unlike other similar TV towers, it is not a concrete, but a steel tubular structure. It is the tallest free-standing tubular steel structure in the World.

The tower is 371.5 m (1219 ft) tall; its 114 m metal aerial reaches 1000 meters above sea level. It has two observation decks at the height of 146 m and 252 m, which are accessible by two high-speed elevators. It is however not open to the public. The tower was built by the architects Terziev, Savchenko, Akimov and Ostroumov. Since Almaty is particularly vulnerable to earthquakes, the TV tower was designed to withstand earthquakes up to a strength of 10 on the Richter scale[.

Here's the our members favorite photos of "Skyscrapers in Almaty City". Upload your photo of Almaty Tower!

Going to Almaty Tower? Get answers from our friendly locals