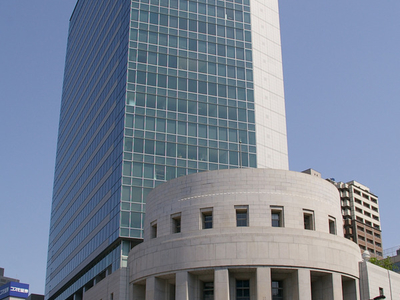 In July 2006 OSE launched their newest futures contract the Nikkei 225 mini which is one tenth of the size of the original Nikkei 225 Futures contract and highly popular among Japanese individual investors. In September 2007 OSE established evening session for Stock Index Futures and Options.The trading hours is from 16:30 to 19:00 (JST. 7:30-10:00 in UTC).
In July 2012 a planned merger with the Tokyo Stock Exchange was approved by the Japan Fair Trade Commission.

The birthplace for futures transactions: Dōjima Rice Exchange (堂島米会所 The origin of securities exchanges stems from the Edo Period, when an exchange for rice & crop was established in Osaka, which at the time was the economic center of Japan. Each prefecture set up its own warehouses in Osaka for shipping & preservation of their rice (to be taxed by the government), and sold to merchants. One of the most famous merchants was "Yodoya", which was based in the southern part of the Yodoyabashi area. Some other merchants gradually gathered to create one market. This market was called "Yodoya-Komeichi", and was the first securities exchange in the nation.

Here's the our members favorite photos of "Skyscrapers near Chūō-ku". Upload your photo of Osaka Securities Exchange!

Going to Osaka Securities Exchange? Get answers from our friendly locals