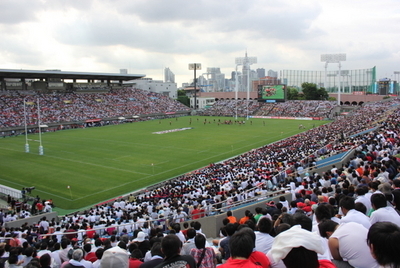 Facilities:
The stadium currently seats 25,194 spectators, but only part of the stands are covered. A large electronic scoreboard was added to the grounds as a step toward modernization before the fifth Rugby World Cup in 2003.

On April 19, 2007 it was announced that the stadium was to be equipped with lights for night games by the end of July, to assist with the RWC 2015 bid. The first rugby game under lights was Japan v Asian Barbarians in August 2007, the send-off for Japan going to RWC 2007. Since then it has been used for the first Top League game of the 2007-8 season between Suntory Sungoliath and Toshiba Brave Lupus, also played under lights and won 10-3 by the former on October 26, 2008.

Here's the our members favorite photos of "Stadiums near Minato". Upload your photo of Chichibunomiya Rugby Stadium!

Going to Chichibunomiya Rugby Stadium? Get answers from our friendly locals