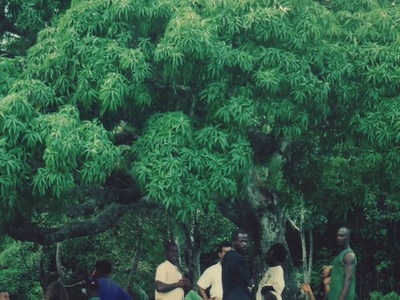 Accompong is a historical maroon village, located in the hills of St. Elizabeth Parish in Jamaica, consolidated by a treaty in 1739. It is located in one of the two areas where runaway slaves settled, originally with the Taínos, isolated enough to be safe first from the Spanish and then later from the British. The town of Accompong was named after the Maroon leader Accompong, who was the brother of a number of other Maroon leaders: Quao, Cuffy, Cudjoe, and Nanny, from an Ashanti family.

In Accompong Town, rebel slaves and their descendants wrested land from the colonial plantation-military regime and transformed a marginal mountainous reservation, imposed by a colonial legal treaty, into a sacred landscape rooted in common land. Cudjoe (also Kojo), a leader of the Maroons, is said to have united the Maroons in their fight for autonomy under the Kindah Tree - a huge, ancient mango tree that is still standing (2009).

Accompong was founded in 1739 after the Maroons signed a peace treaty with the British at nearby "Peace Cave". The treaty granted the Maroons their long sought autonomy. However a second Maroon war broke out in 1795. The Accompong Maroons remained neutral and the British left them alone. At the end of the war all the other Maroon settlements in Jamaica were destroyed, Accompong alone remained.

Here's the our members favorite photos of "Towns & Villages in Montego Bay". Upload your photo of Accompong!

Going to Accompong? Get answers from our friendly locals