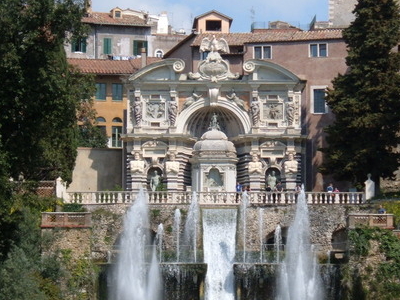 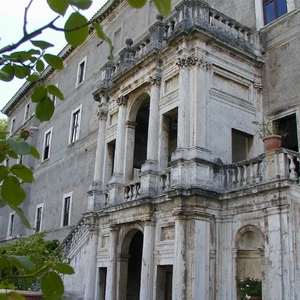 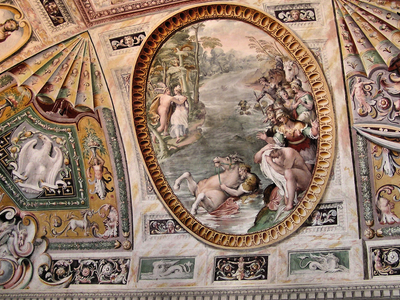 The Villa d'Este is a villa in Tivoli, near Rome, Italy. Listed as a UNESCO World heritage site, it is a fine example of Renaissance architecture and the Italian Renaissance garden.

History
The Villa d'Este was commissioned by Cardinal Ippolito II d'Este, son of Alfonso I d'Este and Lucrezia Borgia and grandson of Pope Alexander VI. He had been appointed Governor of Tivoli by Pope Julius III, with the gift of the existing villa, which he had entirely reconstructed to plans of Pirro Ligorio carried out under the direction of the Ferrarese architect-engineer Alberto Galvani, court architect of the Este.

The chief painter of the ambitious internal decoration was Livio Agresti from Forlì. From 1550 until his death in 1572, when the villa was nearing completion, Cardinal d'Este created a palatial setting surrounded by a spectacular terraced garden in the late-Renaissance mannerist style, which took advantage of the dramatic slope but required innovations in bringing a sufficient water supply, which was employed in cascades, water tanks, troughs and pools, water jets and fountains, giochi d'acqua.

The villa
The villa itself is surrounded on three sides by a sixteenth-century courtyard sited on the former Benedictine cloister. The fountain on a side wall, framed within a Doric, contains a sculpture of a sleeping nymph in a grotto guarded by d'Este heraldic eagles, with a bas-relief framed in apple boughs that links the villa to the Garden of the Hesperides.

The central main entrance leads to the Appartamento Vecchio ("Old Apartment") made for Ippolito d'Este, with its vaulted ceilings frescoed in secular allegories by Livio Agresti and his students, centered on the grand Sala, with its spectacular view down the main axis of the gardens, which fall away in a series of terraces.

To the left and right are suites of rooms, that on the left containing Cardinal Ippolito's's library and his bedchamber with the chapel beyond, and the private stairs to the lower apartment, the Appartamento Nobile, which gives directly onto Pirro Ligorio's Gran Loggia straddling the gravelled terrace with a triumphal arch motif.

Gardens
The garden plan is laid out on a central axis with subsidiary cross-axes, refreshed by some five hundred jets in fountains, pools and water troughs. The water is supplied by the Aniene, which is partly diverted through the town, a distance of a kilometer, and by the Rivellese spring, which supplies a cistern under the villa's courtyard. The garden is now part of the Grandi Giardini Italiani.

The Villa's uppermost terrace ends in a balustraded balcony at the left end, with a sweeping view over the plain below. Symmetrical double flights of stairs flanking the central axis lead to the next garden terrace, with the Grotto of Diana, richly decorated with frescoes and pebble mosaic to one side and the central Fontana del Bicchierone ("Fountain of the Great Cup") loosely attributed to Bernini, where water issues from a seemingly natural rock into a scrolling shell-like cup.

Here's the our members favorite photos of "Historic Houses in Rome". Upload your photo of Villa d'Este!

Going to Villa d'Este? Get answers from our friendly locals

Get in touch with 10 Touristlink members who want to visit Villa d'Este or with Mgrazia Maranatha, Tamara and 3 others who already have been here.