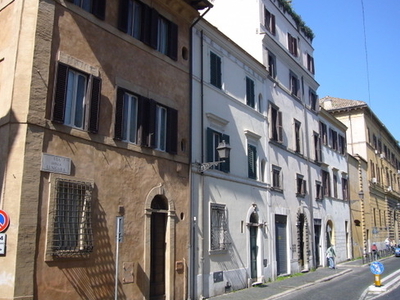 Via della Lungara is a street that links Via di Porta Settimiana to Piazza della Rovere in Rome (Italy), in the Rione Trastevere. The former name of the street was Sub Janiculensis or Sub Jano, while the pilgrims coming to Rome to visit St. Peter's Basilica called it Via Sancta. It was later known as Via Julia, just like the street of the same name on the opposite bank of the Tiber, although Pope Julius II just adapted it (in fact, the street was created by Pope Alexander VI). Finally, the name was changed into the present one, due to its straight length.

Monuments:
Since 1728, in Via della Lungara rose the mental hospital of Santa Maria della Pietà, an extension of the Ospedale di Santo Spirito. It was enlarged in 1867 and then demolished during the building of the Lungotevere.

Here's the our members favorite photos of "Famous Streets in Rome". Upload your photo of Via della Lungara!

Going to Via della Lungara? Get answers from our friendly locals