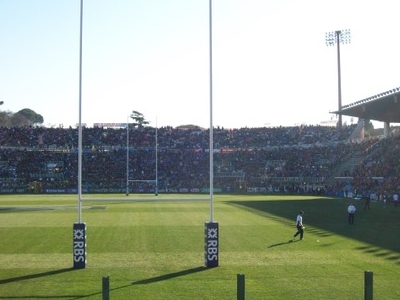 The Stadio Flaminio is a stadium in Rome. It lies along the Via Flaminia, three kilometres northwest of the city centre, 300 metres away from the Parco di Villa Glori. The interior spaces include a covered swimming pool, rooms for fencing, amateur wrestling, weightlifting, boxing and gymnastics.

Events:
Michael Jackson performed two concerts on 23 and 24 May 1988 during his Bad World Tour. Madonna performed a sold out concert a the stadium on 10 June 1990 during the Blond Ambition Tour.

Rugby:
It was the home of Italy rugby union national team for Six Nations tournament home matches from Italy's entry in the competition in 2000 until 2011. The Italian Rugby Federation (FIR) announced, in January 2010, that the stadium would undergo an expansion, that will increase its capacity to 42,000, before the 2012 Six Nations Championship. A failure to progress these plans has been cited as the reason for moving Italy's home Six Nations games from 2012. With a capacity of 32,000 (8,000 covered), it was the smallest of the Six Nations stadiums.

It is no longer considered big enough for the Italian national team and there are frequent reports that the national team will be moving to Genoa or to the Stadio Olimpico di Roma. This change was confirmed with the Italian Rugby Federation (FIR) becoming upset at broken promises of renovations. It was initially reported that the FIR would move Six Nations matches to Stadio Artemio Franchi in Florence. However, when the city finally began the promised renovations, FIR announced that it would instead keep its Six Nations home fixtures in Rome at Stadio Olimpico, and that it would return to the Flaminio once the project is completed. The stadium was originally slated to become the home of Praetorians Roma, a newly formed team that would be one of Italy's two representatives in the Celtic League. However, it was later decided that Benetton Treviso would replace Praetorians.

Football:
In 1989-90 season both Roma and Lazio played at Stadio Flaminio during the renovations of Stadio Olimpico. Stadio Flaminio was also the home of Atletico Roma F.C., an association football club who played in Lega Pro Prima Divisione, but were dissolved in 2011.

Here's the our members favorite photos of "Stadiums in Rome". Upload your photo of Stadio Flaminio!

Going to Stadio Flaminio? Get answers from our friendly locals