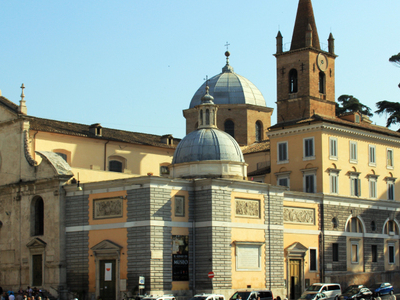 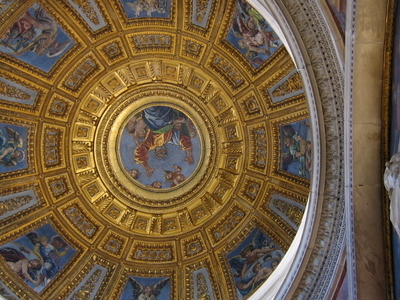 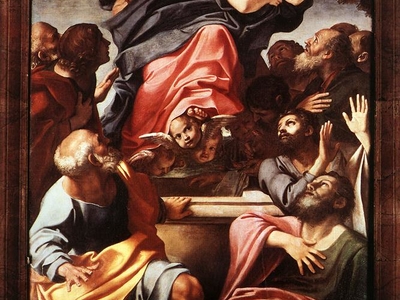 Santa Maria del Popolo is an Augustinian church located in Rome, Italy. It stands to the north side of the Piazza del Popolo, one of the most famous squares in the city. The Piazza is situated between the ancient Porta Flaminia and the park of the Pincio. [The Porta Flaminia was one of the gates in the Aurelian Wall as well as the starting point of the Via Flaminia, the road to Ariminum (modern Rimini).The Via Flaminia was the most important route to the north of Ancient Rome.]

The church includes works by several famous artists, architects and sculptors, for example Raphael, Gian Lorenzo Bernini, Caravaggio, Pinturicchio, Andrea Bregno, Guillaume de Marcillat and Donato Bramante.In 1099, a chapel was built by Pope Paschal II to Our Lady, over a tomb of the Domitia family.The chapel became a church by will of Pope Gregory IX, and given to the Augustinians, who still oversee the church, in the first half of 13th century.

Interior :
The dome is decorated with Raphael's mosaics Creation of the World.

Here's the our members favorite photos of "Churches in Rome". Upload your photo of Santa Maria del Popolo!

Going to Santa Maria del Popolo? Get answers from our friendly locals