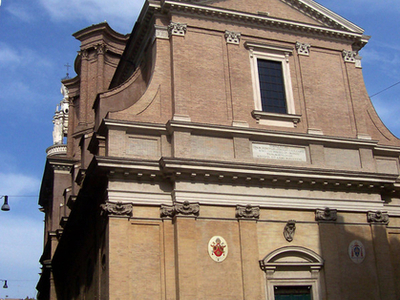 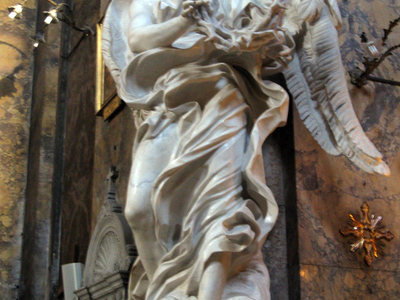 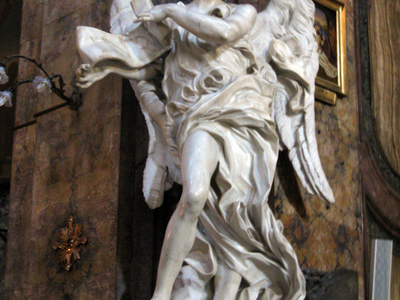 Sant'Andrea delle Fratte is a 17th-century basilica church in Rome, Italy, dedicated to St. Andrew. The Cardinal Priest of the Titulus S. Andreae Apostoli de Hortis is Ennio Antonelli. The current church was built over a pre-existing one, erected in 1192, called infra hortes ("between orchards", whence the name fratte, "woods") for it was located in a countryside area. It was the national church of the Scottish people in Rome, until 1585, when Pope Sixtus V assigned it to the Minim friars of Saint Francis of Paola.

In 1604 the construction of the new church was begun, to the design of Gaspare Guerra. The project, halted eight years later, was revamped in 1653 by Francesco Borromini, who is responsible of the apse, the tambour of the cupola and the square campanile with four orders. After his death, the construction was continued by Mattia De Rossi. The late Renaissance-style façade, with two orders divided by pilasters, was completed in 1826.

The interior has a single nave. The decoration of the cupola is by Pasquale Marini. Along the nave in the first chapel is a wooden ‘’tempietto’’ (temple) (1674) painted by Borgognone and on the wall is a “Baptism of Christ” of Ludovico Gimignani. In the third chapel is the funeral monument of Cardinal Pierluigi Carafa sculpted by Pietro Bracci. In the cloister, the lunettes are frescoed with stories from the life of Saint Francesco by Marini, Francesco Cozza, and Filippo Gherardi.

In the transept, the altar (1736) was designed by Filippo Barigioni, the altarpiece of Saint Francis of Paola was painted by Paris Nogari, the stuccoed angels were added by Giovanni Battista Maini. The presbytery dome has a fresco of the Multiplication of the loaves and fishes by Marini. Behind the altar, is a Crucifixion of Sant’Andrea by Giovanni Battista Lenardi, the Entombment of Sant’Andrea by Francesco Trevisani, and a Death of Saint Andrew by Lazzaro Baldi.

Here's the our members favorite photos of "Churches in Rome". Upload your photo of Sant'Andrea delle Fratte!

Going to Sant'Andrea delle Fratte? Get answers from our friendly locals