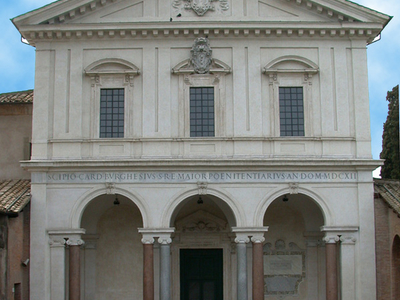 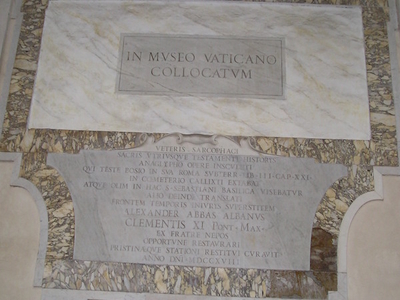 San Sebastiano fuori le mura (Saint Sebastian outside the walls), or San Sebastiano ad Catacumbas (Saint Sebastian at the Catacombs), is a basilica in Rome, central Italy. Up to the Great Jubilee of 2000, San Sebastiano was one of the Seven Pilgrim Churches of Rome, and many pilgrims still favor the traditional list.Built originally in the first half of the 4th century, the basilica is dedicated to St. Sebastian, a popular Roman martyr of the 3rd century.

The sculpture of Saint Sebastian at the altar in the first chapel on the left is by Antonio Giorgetti. The Relics Chapel directly across the nave houses a stone carrying the alleged footprints of Jesus related to the episode of "Quo vadis?" in the apocryphal Acts of Peter, one of the arrows which struck St. Sebastian together with part of the column to which he was tied during the martyrdom.

Noteworthy is the Albani Chapel, built in 1716 and designed by Carlo Maratta, Alessandro Specchi, Filippo Barigioni and Carlo Fontana, commissioned by Pope Clement XI and dedicated to Pope Fabian, who was Bishop of Rome during the persecution of Decius. Flanking the altar, busts of Saints Peter and Paul by Nicolò Cordier recall the first dedication of the basilica.

Here's the our members favorite photos of "Churches in Rome". Upload your photo of San Sebastiano fuori le mura!

Going to San Sebastiano fuori le mura? Get answers from our friendly locals

Get in touch with 1 Touristlink members who want to visit San Sebastiano fuori le mura or with Marco Minuti who already have been here.