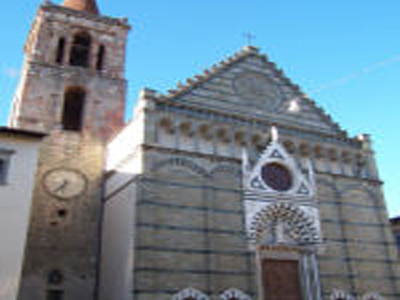 San Paolo is a church in Pistoia, Tuscany, Italy.
It was built in 748, and remade in the 12th century, although only in the 14th century it obtained the current forms. The exterior is characterized by a typical Tuscan blend of Romanesque and Gothic styles, with a polychrome decoration of the façade. Over the portal is a statue of St. James, attributed to Orcagna.
The interior has been largely turned into a Baroque one in the 17th and 19th centuries. Works of arts include a fresco with St. Agatha and St. Eulalia by Gerino Gerini, a 14th century crucifix and Holy Conversation by fra Paolino, which portrays Girolamo Savonarola as St. Peter the Martyr. The sacristy has several 14th-15th century frescoes.

Here's the our members favorite photos of "Churches in Pistoia". Upload your photo of San Paolo, Pistoia!

Going to San Paolo, Pistoia? Get answers from our friendly locals