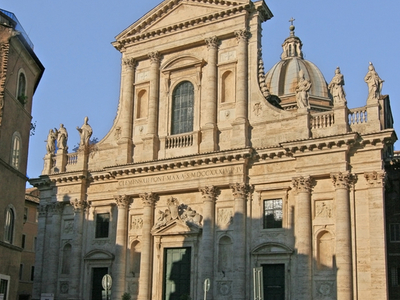 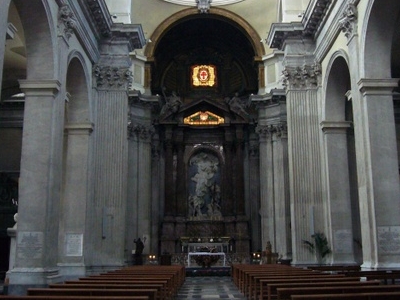 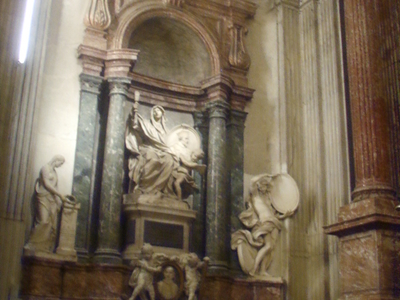 San Giovanni dei Fiorentini, St John of the Florentines, is a church in the Ponte rione or district of Rome. Dedicated to St John the Baptist, the protector of Florence, the new church for the Florentine community in Rome was started in the 16th century and completed in early 18th and is the national church of Florence in Rome.

The main façade fronts onto the Via Giulia. This straight street was an urban initiative, carried out in 1508 by the architect Donato Bramante at the instigation of Pope Julius II Della Rovere, which cut through the irregular urban fabric to the Ponte Sant’Angelo, the bridge which crosses over the Tiber River to the Castel Sant’Angelo and St Peters.

The choir is the family chapel of the Falconieri family and houses a number of Baroque sculptures. The relief on the High Altar portrays the Baptism of Christ by Antonio Raggi. The large altar, made of French red marble and Cottanello marble, is surmounted the figures of Justice by Michel Anguier and Fortitude by Leonardo Reti.

To either side are tombs of the Falconieri family, enriched with stucco and marble portraits of family members in polychrome medallions supported by putti. Statues include 'Faith' by Ercole Ferrata and Charity by Domenico Guidi The neoclassical tomb of Alexander and Marianna Falconieri Lante is by Paolo Benaglia.

To the left of the choir is the Cappella del Crocefisso (the Sacchetti family Chapel), which has wall and vault frescoes by Giovanni Lanfranco and a bronze crucifix created by Paul Sanquirico and made by Prospero Antichi. The left transept accommodates commemorative busts of Antonio Barberini, after Bernini, and of Pietro Francesco De Rossi.The sculptures on the main façade were completed by different artists; Filippo della Valle, Paolo Benaglia, Pietro Bracci, Domenico Scaramuccia, Salvatore Sanni.

Here's the our members favorite photos of "Churches in Rome". Upload your photo of San Giovanni dei Fiorentini!

Going to San Giovanni dei Fiorentini? Get answers from our friendly locals