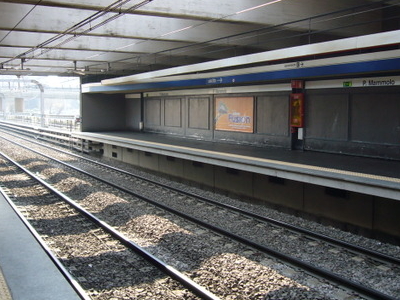 Ponte Mammolo is an above ground station on line B of the Rome Metro in the Ponte Mammolo district of Rome. It is on the road which links viale Palmiro Togliatti to via Tiburtina, and nearby is the river Aniene. The line itself opened in 1990 and so and for a long time line B services did not stop at the incomplete station, until the station finally opened in September 1997. At the same time a major terminus for urban and suburban buses (most of which had previously run to and from Rebibbia station) opened here.

Here's the our members favorite photos of "Metro Stations in Rome". Upload your photo of Ponte Mammolo!

Going to Ponte Mammolo? Get answers from our friendly locals