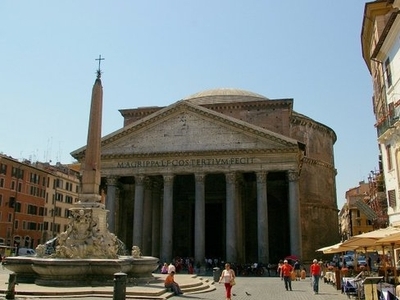 The Piazza della Rotonda is a piazza (city square) in Rome, Italy, on the south side of which is located the Pantheon. The square gets its name from the Pantheon's informal title as the church of Santa Maria Rotonda.

The Fountain and Obelisk:
In the center of the piazza is a fountain, the Fontana del Pantheon, surmounted by an Egyptian obelisk. The fountain was constructed by Giacomo Della Porta under Pope Gregory XIII in 1575, and the obelisk was added to it in 1711 under Pope Clement XI.

The Aqua Virgo, one of the eleven aqueducts that supplied ancient Rome with drinking water, served the area of the Campus Martius, but had fallen into disrepair and disuse by the late Middle Ages. It was reconstructed under Pope Nicholas V and consecrated in 1453 as the Acqua Vergine. In 1570, Giacomo della Porta was commissioned under Pope Gregory XIII to oversee a major project to extend the distribution of water from the Vergine to eighteen new public fountains.

Construction of the fountain in the Piazza della Rotonda was authorized on September 25, together with a fountain for Piazza Colonna, and two more for Piazza Navona; the fountain for the Rotonda, completed in 1575, was of a chalice-type design, around 3.5 to 4 meters in height, and fed with the Vergine water through a terra-cotta conduit. Della Porta designed the fountain, and Leonardo Sormani executed it. Due to the slope of the piazza, the fountain is approached by five steps on the south side, and only two on the north.

Here's the our members favorite photos of "Plazas and Squares in Rome". Upload your photo of Piazza della Rotonda!

Going to Piazza della Rotonda? Get answers from our friendly locals