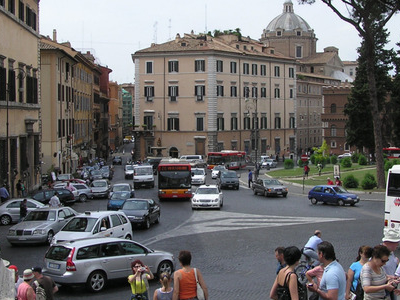 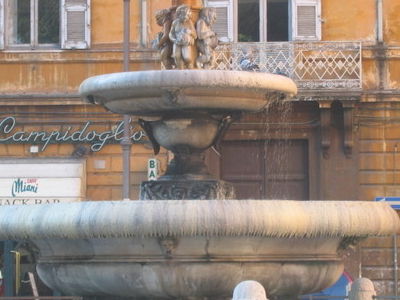 Piazza d'Aracoeli is a square of Rome (Italy), placed at the base of the Capitoline Hill, in the Rione X Campitelli. The present aspect of the square is not the cozy one it had one time: one of the sides was destroyed during the demolitions for the building of the Vittoriano, begun in 1885, and later in the 1930s the whole area of the Capitoline Hill was isolated.

The Palaces:
Palazzo Muti-Bussi The palace - in possession of the family Muti-Bussi, lately become extinct with the dead of Marchioness Olimpia - was built by Giacomo della Porta about in 1585. It has a pentagonal structure but, because of the blunt tip, where the main entrance is, it has six façades. The big front door of the main entrance is decorated with a scroll bearing the saltire mauls of the Mutis coat of arms and lion heads. At the first floor, over the entrance door, is a balcony with a beautiful view over Piazza d'Aracoeli and the majestic staircase and relevant façade of the church with the same name. Recent archeological investigations located ancient Roman walls in the cellars of the palace.

Palazzo Fani, now Pecci-Blunt The three-floors palace overlooks Piazza d’Aracoeli. Simple and noble, it is decorated by a frieze with floral decoration running under the ledge. In the second half of 16th century Mario Fani, noble Roman citizen hailing from Tuscania, commissioned to Giacomo della Porta the renewal of the palace. At the end of 16th century the palace was rented out to primates (in 1601 Cardinal Federico Borromeo lived here). In the first half of 17th century the palace was bought by Filippo Spada and the sold to the Ruspoli family when they came to Rome from Siena. At the beginning of the 18th century the palace passed to the Malatesta family and finally to the Pecci Blunt counts. The building now houses residential buildings, but is also used by the present owners, the Valsecchi Nesbitts, as a location for high-society and cultural events.

Palazzo Massimo di Rignano, then Colonna the present aspect of the palace is due to the architect Carlo Fontana and shows a gate with vegetal decorations, four floors, a modern attic and a crenellated tower-observatory. The left corner of the palace was cut in 1939, during the opening of Via del Teatro di Marcello.

The Fountain:
The fountain, built in 1589 by Andrea Brasca, Pietreo Gucci and Pace Naldini on a design by Giacomo Della Porta, one time rose on two steps repeating the lines of the lower basin and was surrounded by a logline receiving the water. In 1800 the steps were removed and replaced by little columns. The fountain has two basins with different shapes; the smaller one sustains a group of putti pouring water from a vase.

Here's the our members favorite photos of "Plazas and Squares in Rome". Upload your photo of Piazza d'Aracoeli!

Going to Piazza d'Aracoeli? Get answers from our friendly locals