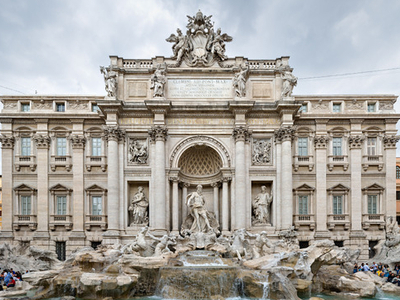 The Palazzo Poli is a palace in Rome, Italy, forming the backdrop to the famous Trevi Fountain. Luigi Vanvitelli gave it a monumental facade as a setting for the fountain. It was there that Princess Zenaǐde Wolkonsky threw her lavish parties in the 1830s. The central portion of the palace was demolished to provide room for the large fountain in 1730. The Palazzo Poli houses an important collection of copper engraving plates from the 16th century to the present. The Palazzo also houses the Istituto Nazionale per la Grafica.

Here's the our members favorite photos of "Palaces in Rome". Upload your photo of Palazzo Poli!

Going to Palazzo Poli? Get answers from our friendly locals