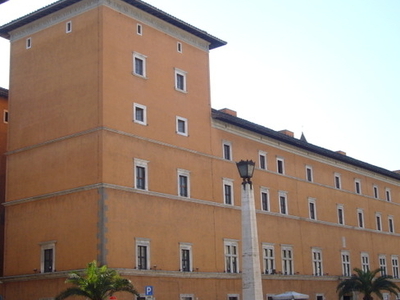 Palazzo Della Rovere is a palace in Rome, Italy, facing Via della Conciliazione. It is also known as Palazzo dei Penitenzieri. The building has a massive façade, inspired by that of Palazzo Venezia, with a tower on the left. The name of Domenico della Rovere is written on the windows of the first floor, while the coat of arms on the façade is that of Pope Clement XIV. The interior has a court on two levels: a lower one with a portico featuring octagonal pillars and a pit, and an upper one with gardens. The palace has a rich internal decoration, often depicting fake architectures. The most notable is that of the Semi-Gods Ceiling, a gallery of mythological and allegorical figures painted by Pinturicchio in 1501.

Here's the our members favorite photos of "Palaces in Rome". Upload your photo of Palazzo Della Rovere!

Going to Palazzo Della Rovere? Get answers from our friendly locals