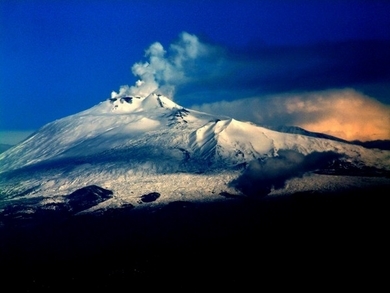 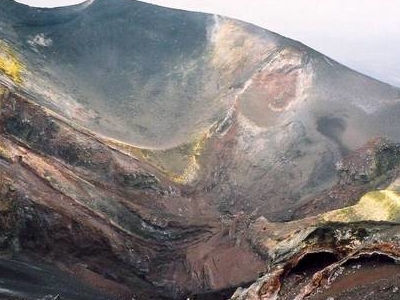 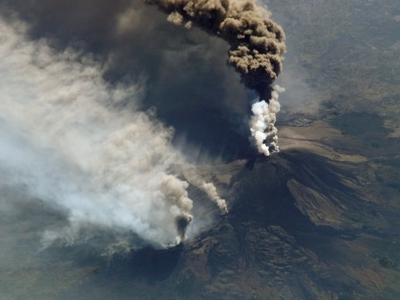 Mount Etna (Latin: Aetna, Sicilian: Mungibeddu or 'a Muntagna) is an active stratovolcano on the east coast of Sicily, Italy, close to Messina and Catania. It lies above the convergent plate margin between the African Plate and the Eurasian Plate. It is the tallest active volcano on the European continent, currently 3,329 m (10,922 ft) high, though this varies with summit eruptions. It is the highest mountain in Italy south of the Alps. Etna covers an area of 1,190 km2 (459 sq mi) with a basal circumference of 140 km.

This makes it by far the largest of the three active volcanoes in Italy, being about two and a half times the height of the next largest, Mount Vesuvius. Only Mount Teide in Tenerife surpasses it in the whole of the European-North-African region. In Greek Mythology, the deadly monster Typhon was trapped under this mountain by Zeus, the god of the sky and thunder and king of gods, and the forges of Hephaestus were said to also be located underneath it.

Mount Etna is one of the most active volcanoes in the World and is in an almost constant state of activity. The fertile volcanic soils support extensive agriculture, with vineyards and orchards spread across the lower slopes of the mountain and the broad Plain of Catania to the south. Due to its history of recent activity and nearby population, Mount Etna has been designated a Decade Volcano by the United Nations. In June 2013, it was added to the list of UNESCO World Heritage Sites.

Facilities:
Etna is one of Sicily's main tourist attractions, with thousands of visitors every year. The most common route is through the road leading to Sapienza Refuge, lying at the south of the crater at elevation of 1910 m. It hosts a large parking, several bars, a hotel, and is a starting point for the cable car. From the Refuge, a cableway runs uphill to the elevation of 2500 m; from there, visitors can take a drive with special terrain vehicles, or take a long walk to the designated crater area at 2920 m.

Ferrovia Circumetnea - Round-Etna railway - is a narrow-gauge railway constructed between 1889 and 1895. It runs around the volcano in a 110-km long semi-circle starting in Catania and ending in Riposto 28 km north of Catania. There are two ski resorts on Etna: one at the Sapienza Refuge, with a chairlift and three ski lifts, and a smaller one on the north, at Piano Provenzana, with three lifts and a chairlift.

Here's the our members favorite photos of "Volcanoes in Sicily". Upload your photo of Mount Etna!

Going to Mount Etna? Get answers from our friendly locals

Get in touch with 3 Touristlink members who want to visit Mount Etna or with Piumal Wijethunga, Snezana Tibor and 1 others who already have been here.