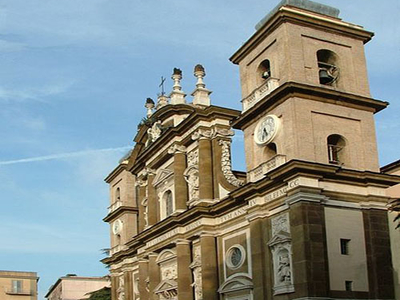 The Cathedral Basilica of St. Peter Apostle is the cathedral and main church of Frascati, Italy. It was founded in 1598, under design of Ottaviano Nonni, best known as Mascherino. After twelve years, on June 29, 1610 the first Mass was celebrated. In 1696 Girolamo Fontana began work on a new facade, which was finished in 1700.
The two bell towers on either side of the facade were constructed later. It has a Greek cross plan, and houses a wooden crucifix of 11th century from Tusculum, a Madonna - "Mysteries of the Rosary" attributed to Domenichino, a relief by Pompeo Ferrucci (1612) represents Jesus handing over the keys to St. Peter, and a 14th century Madonna with the baby in the Chapel of the Gonfalone, that was retouched by Domenichino. On the interior side of the facade wall there is a bronze "Holy Year Cross" of 1750.
The interior of the cathedral was destroyed by a bombing on September 8, 1943, and so today it appears bare, except for a little chapel off to the right.
In the nave, on the inner side of the facade, there is a funerary white marble monument of Charles Edward Stuart with a memorial tablet. When he died in 1788, his brother, the duke of York and bishop of Frascati, Henry Benedict Stuart, celebrated his solemn funeral here. The cathedral received many tokens of Henry's episcopal concern, most of which are still visible today.
When the body of Charles Stuart was transferred to the Saint Peter's Basilica, his "praecordia", were left here in a small urn enclosing his heart, placed beneath the floor below the funerary monument.

Here's the our members favorite photos of "Churches near Frascati". Upload your photo of Frascati Cathedral!

Going to Frascati Cathedral? Get answers from our friendly locals