Church of the Gesu (Frascati) 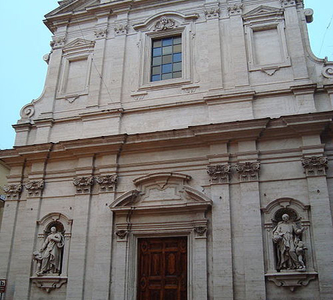 Church of the Gesu is a Roman Catholic church in Frascati, in the province of Rome, in Italy.
The church was originally built in 1520. In 1554 the city began the construction of the present church, but did not complete it. In 1560 the Jesuits took possession of the site and completed it by 1597, calling it the church of the Annunciation of the Blessed Mary. In 1694 the Jesuits decided to expand the church and completed the new church by 1700.
The 18th century Blessed Antonio Baldinucci developed a particular devotion to the Refugium Peccatorum (Refuge of Sinners) image of Virgin Mary in the church, which has been considered miraculous. The Jesuits spread copies of the image to Mexico by the 19th century, and it began to be depicted in missions there.

Here's the our members favorite photos of "Churches near Frascati". Upload your photo of Church of the Gesu (Frascati)!

Going to Church of the Gesu (Frascati)? Get answers from our friendly locals

Becwith is the only Touristlink member to visit Church of the Gesu (Frascati). Have you been here? Click here to save it.