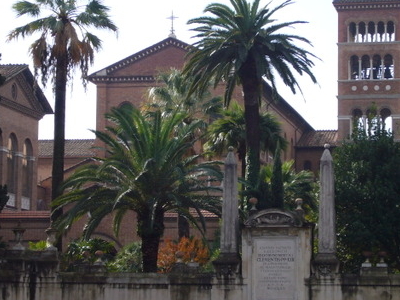 The chiesa di Sant’Anselmo all’Aventino is a church in Rome. It is in the Cavalieri di Malta square, in the rione Ripa. The attached abbey is called Badia Primaziale (Primatial Abbey) of the order of Saint Benedict since it is the residence of the order's senior abbot, the Abbot Primate. It is named after the Italian saint and theologian, Anselm of Canterbury, is the home of the Abbot Primate of the Benedictines, seat of the Benedictine Confederation, and also hosts an Athenaeum, including the Pontifical Liturgical Institute, and the Philosophy and Theology faculties.

Located on the Aventine Hill in Rome, Italy, Sant'Anselmo is a beautiful 19th century monastery, built in a classical style, on top of Roman ruins which date from the 1st century BC to the 4th century AD. These remains are visible and visitable, by arrangement, under both the first courtyard and in the basement. The church is mainly known to the local Roman people because of the performance of Gregorian chant during the Sunday mass. Next to the church there are the Pontificio Ateneo Sant Anselmo and the Pontificio Istituto Liturgico.

The church is more modern than it looks: it was built by Francesco Vespignani between 1892 and 1896, on a land given by the Knights of Malta to the Benedictines, who made it their central church in Rome, together with the monastery and the theological university. The church shows a neo-romanic style, Vespignani built it according to the project of the Belgium Benedictine abbot Ildebrando of Hemptime. The church is made of three naves, divided by granite columns. The ceiling is a truss and the apse is covered by a mosaic. The crypt is made of 5 naves. the church is built on the ruins of an ancient Roman domus of the 2nd-3rd century A.D., still preserved under the church. From this domus comes a mosaic showing the myth of Orpheus, now in the monastery.

Here's the our members favorite photos of "Churches in Rome". Upload your photo of Church of Sant'Anselmo all'Aventino!