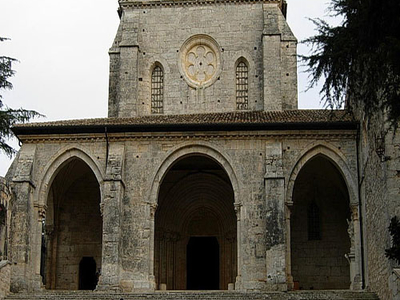 Casamari Abbey is a Cistercian abbey in the province of Frosinone, Italy, c. 10 kilometers east-south-east of Veroli.
It marks the site of Cereatae, the birth-place of Caius Marius, afterwards known, as inscriptions attest, as Cereatae Marianae, having been separated perhaps by the triumvirs, from the territory of Arpinum. In the early Imperial times it was an independent community.
The abbey is a fine example of Burgundian early-Gothic architecture (1203-1217), paralleled in Italy by that of Fossanova alone and is very well preserved. It was declared a National Monument in 1874.
The abbey has a plan similar to the French contemporary ones, the entrance being a gate with a double arch. The interior has a garden whose central part is occupied by a cloister, of quadrangular shape, with four galleries having a semicylindrical ceiling.
The church can be accessed from the cloister. It has a basilica plan with a nave and two aisles; the facade has a large external portico, while behind the altar is the choir, added in 1940. The windows of the church have alabaster slabs instead of glasses.

Here's the our members favorite photos of "Churches near Veroli". Upload your photo of Casamari Abbey!

Going to Casamari Abbey? Get answers from our friendly locals