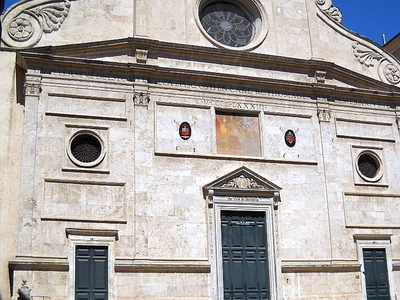 Sant'Agostino is a church in Rome, Italy, not far from Piazza Navona. It is one of the first Roman churches built during the Renaissance. The construction was funded by Guillaume d'Estouteville, Archbishop of Rouen and Papal Chancellor. The façade was built in 1483 by Giacomo di Pietrasanta, using travertine taken from the Colosseum. The design of the church is attributed to the late 15th century architect Baccio Pintelli, with later 18th century restorations by Luigi Vanvitelli. It is a plain work of the early Renaissance style. Sant'Agostino was once noted for the presence of a number of courtesans and prostitutes in its congregation.

Artwork:
The most famous work of art presently in the church is the Madonna di Loreto, an important Baroque painting by Caravaggio. The church also contains a Guercino canvas of Saints Augustine, John the Evangelist and Jerome; a fresco of the Prophet Isaiah by Raphael; and the statues of the s.Anna and Virgin with Child, by Andrea Sansovino and of the Madonna del Parto (Our Lady of Childbirth) by his pupil, Jacopo Sansovino.

The latter sculpture is reputed by tradition to work miracles and was, according to a legend, based on an ancient statue of Agrippina holding Nero in her arms. In 1616, the 17th-century Baroque artist Giovanni Lanfranco decorated the Buongiovanni Chapel (in the left transept) with three canvasses and a ceiling fresco of the Assumption. The church also houses Melchiorre Caffà's sculpture "St. Thomas of Villanova Distributing Alms", completed by his mentor Ercole Ferrata. Pietro Bracci designed and sculpted the polychromatic tomb of Cardinal Giuseppe Renato Imperiali (1741).

Tombs:
The church contains the tomb of Saint Monica, mother of Saint Augustine, that of Fiammetta, lover of Cesare Borgia and a famous courtesan, and that of Olav Trondson, archbishop of Norway 1459 - 1473. His tombstone has the inscription "CVI DEDERAT SACRAM MERITO NORVEGIA SEDEM HIC TEGIT OLAVI FRIGIDVS OSSA LAPIS", meaning: Olav, who Norway gave the holy chair. Here is his bones under the cold stone". The Titulus S. Augustini is held by Cardinal Jean-Pierre Ricard since 2006. Furthermore, it is the station church of the first Saturday in Lent.

Here's the our members favorite photos of "Churches in Rome". Upload your photo of Basilica of Sant'Agostino!

Going to Basilica of Sant'Agostino? Get answers from our friendly locals