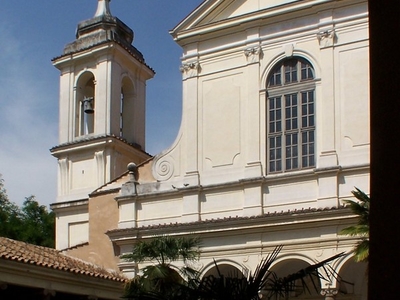 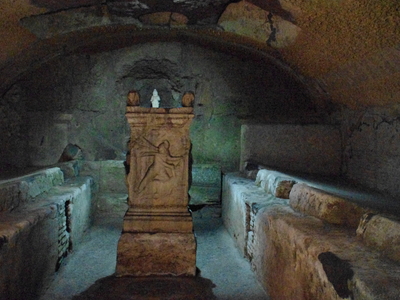 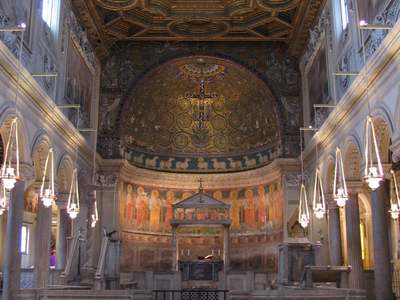 Save me
Been here
Want to go
Show on Map
Here to help 64 tour guides, 50 locals and 1 ambassador

The Basilica of Saint Clement is a Roman Catholic minor basilica dedicated to Pope Clement I located in Rome, Italy. Archaeologically speaking, the structure is a three-tiered complex of buildings: the present basilica built just before the year 1100 during the height of the Middle Ages; beneath the present basilica is a 4th century basilica that had been converted out of the home of a Roman nobleman, part of which had in the 1st century briefly served as an early church, and the basement of which had in the 2nd century briefly served as a mithraeum; the home of the Roman nobleman had been built on the foundations of a republican era building that had been destroyed in the Great Fire of 64.
The current basilica was rebuilt in one campaign by Cardinal Anastasius, ca 1099-ca. 1120. An now outdated hypothesis held that the original church had burned out during the Norman sack of the city under Robert Guiscard in 1084, but no evidence of fire damage in the lower basilica has been found to date. One possible explanation is that the lower basilica was filled in and the new church built on top due to the close association of the lower structure with the imperial opposition pope ("antipope") Clement III / Wibert of Ravenna.
Today, it is one of the most richly adorned churches in Rome. The ceremonial entrance (a side entrance is ordinarily used today) is through an atrium (B on plan) surrounded by arcades, which now serves as a cloister, with conventual buildings surrounding it. Fronting the atrium is Fontana's chaste facade, supported on antique columns, and his little campanile (illustration). The basilica church behind it is in three naves divided by arcades on ancient marble or granite columns, with Cosmatesque inlaid paving.

The 12th-century schola cantorum (E on plan) incorporates marble elements from the original basilica. Behind it, in the presbytery is a ciborium (H on plan) raised on four gray-violet columns over the shrine of Clement in the crypt below. The episcopal seat stands in the apse, which is covered with mosaics on the theme of the Triumph of the Cross that are a high point of Roman 12th century mosaics.
Irish Dominicans have been the caretakers of San Clemente since 1667, when England outlawed the Irish Catholic Church and expelled the entire clergy. Pope Urban VIII gave them refuge at San Clemente, where they have remained, running a residence for priests studying and teaching in Rome. The Dominicans themselves conducted the excavations in the 1950s in collaboration with Italian archaeology students.
On one wall in the courtyard there is a plaque affixed by Pope Clement XI, who praises San Clemente, declaring, "This ancient church has withstood the ravages of the centuries." Clement undertook restorations to the venerable structure, which he found dilapidated. He selected Carlo Stefano Fontana, nephew of Carlo Fontana as architect, who erected a new facade, completed in 1719. The carved and gilded coffered ceilings of nave and aisles, fitted with paintings, date from this time, as do the stucco decor, Ionic capitals and frescos.
In one lateral chapel there is a shrine with the tomb of Saint Cyril of the Saints Cyril and Methodius who created the Glagolitic alphabet and Christianized the Slavs. Pope John Paul II used to pray there sometimes for Poland and the Slavic countries. The chapel also holds a Madonna by Giovanni Battista Salvi da Sassoferrato.

Here's the our members favorite photos of "Churches in Rome". Upload your photo of Basilica di San Clemente!

Going to Basilica di San Clemente? Get answers from our friendly locals