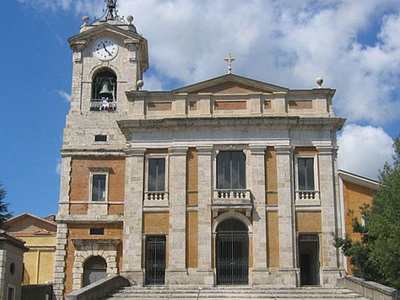 Alatri Cathedral, otherwise the Basilica of Saint Paul (Italian: Cattedrale di Alatri; Basilica concattedrale di San Paolo apostolo) is the principal church (duomo) of Alatri, Lazio, Italy. It is dedicated to Saint Paul. It was formerly the cathedral of the Diocese of Alatri, and since 30 September 1986 has been a co-cathedral of the Diocese of Anagni-Alatri. Pope Pius XII declared it a basilica minor on 10 September 1950.
The cathedral was built on what was once the centre of the acropolis of Alatri over the remains of an ancient shrine of the Hernici and of a temple dedicated to Saturn. References to a cathedral go back to the first half of the 11th century: a cathedral chapter is documented here in 930.
The facade, in stone and opus latericium, is from the end of the 18th century and the beginning of the 19th. The interior has a Latin cross ground plan, with three aisles separated by pilasters and a raised transept.
As well as the relics of Sixtus I, the cathedral also keeps those of the Roman Saint Alexander from the Catacombs of Callixtus, translated to Alatri in 1640, and the Ostia incarnata, from the Eucharistic miracle of Alatri of 1228. The cathedral's works of art include a copy of Guido Reni's Crucifixion; the face of Saint Sixtus in chased and repoussé silverwork (1584); and the Madonna del suffragio, a sculpted wooden group of figures executed in 1639.
In a chapel are the remains of Blessed Maria Raffaella Cimatti, transferred here on 27 March 2010 from the church of St. Benedict.

Show nearby: Churches near Alatri, Churches in Latina, Places To Visit near Alatri Cathedral

Here's the our members favorite photos of "Churches near Alatri". Upload your photo of Alatri Cathedral!

Going to Alatri Cathedral? Get answers from our friendly locals