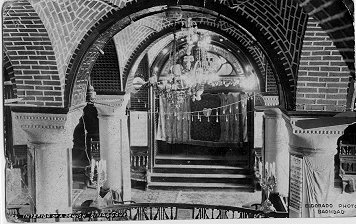 According to tradition, the Great Synagogue of Baghdad, also known as the Shaf ve’Yativ Synagogue, is traditionally believed to stand on the site of a synagogue built by King Jeconiah who was exiled from the Land of Israel to Babylon in 597 BCE. It is said that material gathered from the ruins of the Temple in Jerusalem was used in its construction. The building now serves as a museum in which the synagogue had been reconstructed.

Here's the our members favorite photos of "Synagogues in Baghdad". Upload your photo of Great Synagogue of Baghdad!

Going to Great Synagogue of Baghdad? Get answers from our friendly locals