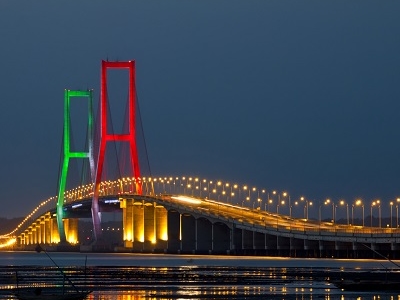 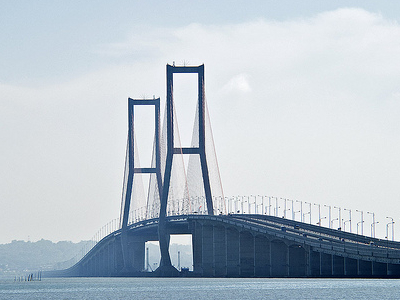 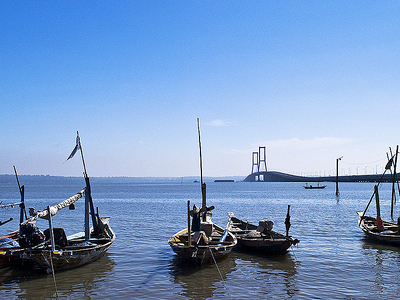 More Photos >
Save me
Been here
Want to go
Show on Map
Here to help 41 tour guides, 158 locals and 1 ambassador

The Suramadu Bridge (Indonesian: Jembatan Suramadu), also known as the Surabaya–Madura Bridge, is cable-stayed bridge between Surabaya on the island of Java and the town of Bangkalan on the island of Madura in Indonesia.Opened in June 2009, the 5.4-km bridge is the longest in Indonesia and the first bridge to cross the Madura Strait.The cable-stayed portion has three spans with lengths 192 m, 434 m and 192 m. The bridge has two lanes in each direction plus an emergency lane and a dedicated lane for motorcycles in each direction.

History
The bridge was built by a consortium of Indonesian companies PT Adhi Karya and PT Waskita Karya working with China Road and Bridge Corp. and China Harbor Engineering Co. Ltd. The total cost of the project, including connecting roads, has been estimated at 4.5 trillion rupiah (US$445 million).

Construction began in August 2003. In July 2004, a girder collapsed, killing one worker and injuring nine others. Work on the bridge halted at the end of 2004 due to lack of funds, but was restarted in November 2005. The main span of the bridge was connected on 31 March 2009, and the bridge was opened to the public on 10 June 2009.

Tolls were initially set at Rp. 30,000 (US$3 in 2009) for four-wheeled vehicles and Rp. 3,000 (US$0.30) for two-wheelers.Within a week of the opening, it was discovered that nuts and bolts as well as maintenance lamps had been stolen and that there was evidence of vandalism of cables supporting the main span.

Here's the our members favorite photos of "Bridges in Surabaya". Upload your photo of Suramadu Bridge!

Going to Suramadu Bridge? Get answers from our friendly locals

Get in touch with 2 Touristlink members who want to visit Suramadu Bridge or with Agus Setiawan, Herdina Putri and 24 others who already have been here.