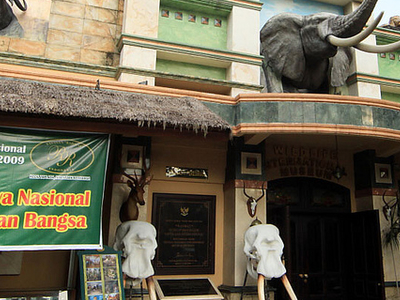 Displays various collections of wildlife from the smallest to the largest according to the habitat. The atmosphere is fun, beautiful architecture and the building will be presenting real-world wildlife and natural environment. Its founder is a fan of sport hunting and the conservation of nature lovers. Museums & Galleries Through this he invites us to better understand the diversity of wildlife that exist in the world, introduced him to our children, so we are more caring and preserving the wildlife living in the world. A place that was built as a means of education research as well as tourist attractions.

The founder is DR. H. Rahmat Shah, a sports fan and a professional hunting conservationists and nature lovers who have traveled around various parts of the world to study directly the concept of conservation with utilization that has been adopted by many countries including USA, Canada, Russia, Germany, Turkey, France, Italy, Spain, Austria, China, Kazakhstan, Romania, Mongolia, Iran, Pakistan, Australia, New Zealand, almost all of Africa and other countries in order to prevent extinction and increase wildlife populations and their habitats that remain stable throughout the period.