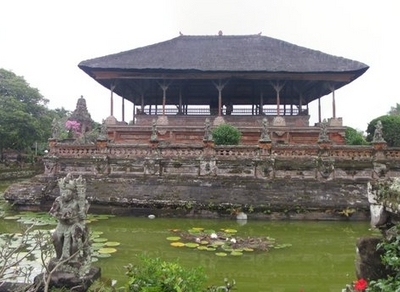 The Klungkung Palace is a historical building complex situated in Semarapura, the capital of the Klungkung Regency (kabupaten) on Bali, Indonesia. The palace (puri) was erected at the end of the 17th century, but largely destroyed during the Dutch colonial conquest in 1908. Today the basic remains of the palace are the court of justice, the Kertha Gosa Pavilion, and the main gate that bears the date Saka 1622 (AD 1700). Within the old palace compound is also a floating pavilion, Bale Kambing, which was added in the 1940s. The descendants of the rajas that once ruled Klungkung today live in Puri Agung, a residence to the west of the old palace, which was built after 1929.

The Origins of the Palace:
The Klungkung kingdom was considered to be the highest and most important of the nine kingdoms of Bali from the late 17th century to 1908. It was the heir of the old Gelgel kingdom, which had dominated the island since long but had broken up in the late 17th century. In 1686 (or, in another version, 1710), Dewa Agung Jambe I, a prince descending from the old Rajas of Gelgel, moved to Klungkung (also known as Semarapura) and built a new palace or puri.

Although he did not have the prerogatives of his Gelgel forbears, the new palace maintained a degree of prestige and precedence on the politically fragmented island. The palace was built in square form, being roughly 150 meters on each side with the main gate to the north. It was divided in several blocks with various ritual and practical functions. The complex displayed a deep symbolism according to a fixed structural pattern.

Here's the our members favorite photos of "Palaces in Semarapura". Upload your photo of Klungkung Palace!

Going to Klungkung Palace? Get answers from our friendly locals

Get in touch with 3 Touristlink members who want to visit Klungkung Palace or with Andriani Wiria, Wulan Phitaloka and 4 others who already have been here.