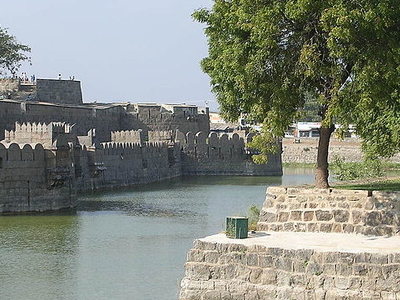 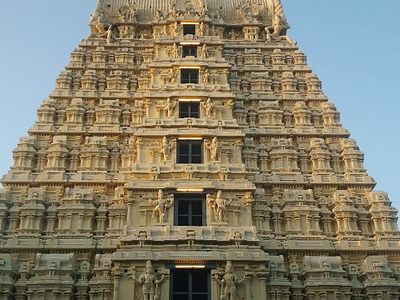 More Photos >
Save me
Been here
Want to go
Show on Map
Here to help 5 tour guides, 42 locals and 1 ambassador

Vellore Fort (வேலூர் கோட்டை) is a large 16th-century fort situated in Vellore city, in the state of Tamil Nadu, India built by Vijayanagara Kings. The Fort was at one point of time the headquarters of the Aravidu Dynasty of Vijayanagara Empire. The fort is known for its grand ramparts, wide moat and robust masonry. The Fort's ownership passed from Vijayanagara Kings, to the Bijapur Sultans, to Marathas, to the Carnatic Nawabs and finally to the British, who held the fort until India gained independence. The Indian government maintains the Fort with the Archaeological Department.

During British rule, the Tipu Sultan's family and the last king of Sri Lanka, Sri Vikrama Rajasinha were held in as prisoners in the fort. The fort houses a Christian church, a Muslim mosque and a Hindu temple, the latter of which is famous for its magnificent carvings. The first rebellion against British rule erupted at this fort in 1806, and it is also a witness to the massacre of the Vijayanagara royal family of Sriranga Raya.

History:
Vellore Fort was built by Chinna Bommi Nayak and Thimma Reddy Nayak, subordinate Chieftains under Sadasiva Raya of the Vijayanagara Empire in the year of 1566 AD. Vellore Fort gained strategic prominence following the re-establishment of Vijayanagar rule with Chandragiri as their 4th capital after the Talikota battle . The Aravidu Dynasty that held the title of Rayas in 17th century resided in this fort, using it as a base in the battle of Toppur in the 1620s. This major battle took place for the claiming of the Raya title between two faction of the Raya family. Each faction was by their respective subordinates; the Nayaks of Tanjore, the Gingee and the Madurai taking sides to suit their interests.

The Rayas also had long-running battles with their longtime rivals, the Bijapur Sultans, and with the Nayaks of Madurai and the Gingee over non-remittance of annual tributes. In the 1640s, during the reign of Sriranga Raya III, the Fort was briefly captured by the Bijapur army, but was eventually recaptured with the help of the Nayaks of Tanjore.

Construction:
The fort was constructed in granite from the nearby quarries in Arcot and Chittor districts. It spreads over an area of 133 acres (0.54 sq km) and is located at an altitude of 220m within a broken mountain range. The fort is surrounded by a moat which was once used as an additional line of defence in the case of an invasion. It includes an escape tunnel leading to Virinjipuram about 12 km away, which could be used by the king and other royals in the event of an attack. The fort is considered to be among the best of military architecture in Southern India and is known for its grand ramparts, wide moat and robust masonry. This 13th-century fort was opened up to tourists and is now maintained by the Archaeological Survey of India, and is well maintained compared to other monuments.

Buildings Within The Fort:


Royal Prisoners: Location And Transportation:
The Fort is situated in the centre of Vellore town opposite to the Old Bus stand. Vellore is on the Chennai-Bangalore highway and is 120 km (75 mt) from Chennai and 210 km (130 mt) from Bangalore. The nearest rail station is Vellore-Katpadi Junction, where all super fast trains stop. The nearest airports are Tirupati Airport, Chennai International Airport and Bengaluru International Airport.

Here's the our members favorite photos of "Forts in Vellore". Upload your photo of Vellore Fort!

Going to Vellore Fort? Get answers from our friendly locals

Connect with Pondicherry Agent, Aaron Simon and 1 other members who have already visited Vellore Fort.