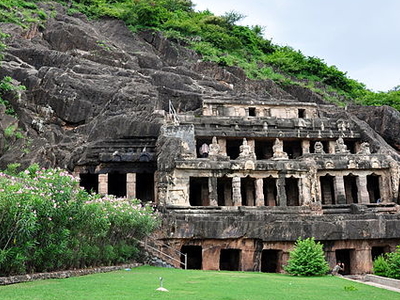 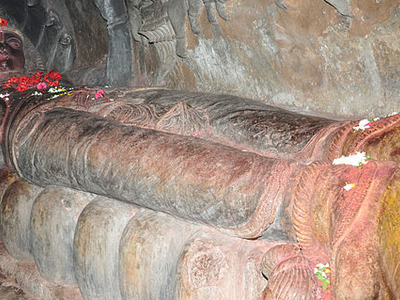 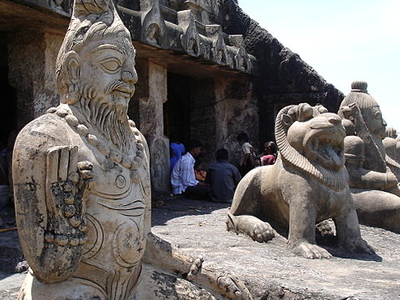 The Undavalli Caves, an example of Indian rock-cut architecture and a finest testimonial of ancient vishwakarma sthapathis, are located in the village of Undavalli in Tadepalle Mandal in Guntur District, near the southern bank of the Krishna River, in the state of Andhra Pradesh, India. The caves are located 6 km south west from Vijayawada, 22 km north east of Guntur City and about 280 km from Hyderabad, Andhra Pradesh.

These caves have been carved out of solid sandsone on a hillside in the 4th to 5th centuries A.D. There are several caves. The best known and largest one has four stories with a huge unknown recreated statue reclining posture sculpted from a single block of granite inside the second floor. Originally a Jain cave resembling architecture of Udayagiri and Khandgiri.

The walls of the caves display sculptures carved by skilled craftsmen. Undavalli caves are associated with the Jain kings of 420 to 620 A.D. Caves are surrounded by the green countryside. From the high hill above the cave overlooking the Krishna river many fine specimens of rock cut architecture can be seen.

Here's the our members favorite photos of "Caves in Vijayawada". Upload your photo of Undavalli Caves!

Going to Undavalli Caves? Get answers from our friendly locals