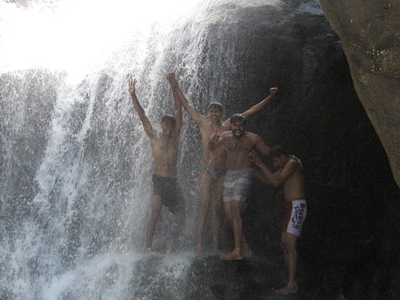 Ullakarvi (In Tamil, 'ullakarvi') is a waterfall on the Western Ghats hills near Nagercoil in Kanyakumari District, Tamil Nadu state.Ullakarvi falls is about 35 km (22 mi) from Kanyakumari town and about 17 km (11 mi) from Nagercoil town, near Azhakiyapandiapuram village.

Lower Falls:
The lower portion of the waterfall is a good picnic spot. The view from this spot of the greenery below the hills is exhilarating. Good to have bath and relax for an hour. The water here is cool even during the hot months, though the waterflow is less during the summer months.To reach the Higher falls, one needs to climb about 200 m (660 ft) uphill (recommended only for healthy people who can climb and swim).

Here's the our members favorite photos of "Waterfalls in Nagercoil". Upload your photo of Ullakarvi!

Going to Ullakarvi? Get answers from our friendly locals

Love waterfalls? Check these out;

Top Voted Waterfalls Around the World