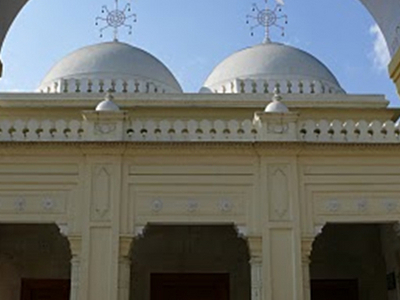 This Hindu, Vaishnav temple in Manipur adjoins the palaces of the former rulers of the then kingdom in the city of Imphal. The temple is simple in design with gold domes, a paved court and a large, raised congregation hall. The main deity in the center is Govindaji. The temple has idols of Radha Govinda, Balaram and Krishna and Jagannath, Balabhadra and Subhadra on either side of the main deity. The temple of Shree Govindajee was originally built in 1846 A.D during the reign of Maharaj Nara Singh.

Here's the our members favorite photos of "Temples in Imphal". Upload your photo of Shri Govindajee Temple!

Going to Shri Govindajee Temple? Get answers from our friendly locals

Tisi Tourism is the only Touristlink member to visit Shri Govindajee Temple. Have you been here? Click here to save it.