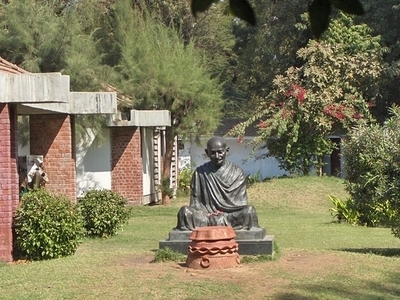 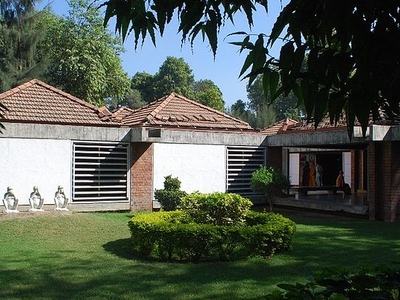 Sabarmati Ashram also known as Gandhi Ashram, Harijan Ashram, or Satyagraha Ashram is located in the Sabarmati suburb of Ahmedabad adjoining to famous Ashram Road, at the bank of River Sabarmati, 4 miles from the town hall. This was one of the residences of Mohandas Karamchand Gandhi. Mahatma Gandhi spent approximately 12 years of his life here. This ashram is now a national monument established by the Government of India due to its significance for the Indian independence movement in the form of the Dandi March in 1930.

History:
The ashram was originally established at the Kochàrab Bungalow of Jivanlal Desai on 25 May 1915. The Ashram was then shifted on 17 June 1917 to a piece of open land on the banks of the river Sabarmati. Reasons for this shift included: Gandhi wanted to do some experiments in living (e.g. farming, animal husbandry, cow breeding, khadi and related constructive activities for which he was in search of this kind of barren land.)

It was believed that this is one of the ancient ashram site of Dadhichi Rishi who had donated his bones for a righteous war, but his main ashram lies in Naimisharanya, near Lucknow, Uttar Pradesh; it is between a jail and a crematorium, and he believed that a satyagrahi has invariably to go to either place. Mahatma Gandhi said, "This is the right place for our activities to carry on the search for truth and develop fearlessness, for on one side are the iron bolts of the foreigners, and on the other the thunderbolts of Mother Nature."

Present day:
The ashram now has a museum, Gandhi Smarak Sangrahalay. In 1963 the museum building was erected (designed by architect Charles Correa), and memorial activities were then started here.One of the important activities undertaken is the establishment of a Gandhi Smarak Sangrahalaya. Initially started in 'Hriday Kunj,' Gandhi's own cottage in the Ashram, the Sangrahalaya has now shifted to its own well-designed and well-furnished building which was inaugurated by Jawaharlal Nehru, Prime Minister of India, on 10 May 1963.

Upasana Mandir:It is an open -air prayer ground, situated between 'Hridaya Kunj' and 'Magan Kutir' (the hut where Maganlal Gandhi, the ashram manager, used to stay).Here, Gandhiji used to refer to individual questions after prayers and as the head of the family analysed and gave his solutions.

Nandini: It is on the right hand side of 'Hridaya Kunj'. It is an old Ashram guest house, where guests from India and abroad are put up.

Here's the our members favorite photos of "Museums in Ahmedabad". Upload your photo of Sabarmati Ashram!

Going to Sabarmati Ashram? Get answers from our friendly locals

Connect with Prasanna S, Sreekumar S Nair and 4 other members who have already visited Sabarmati Ashram.