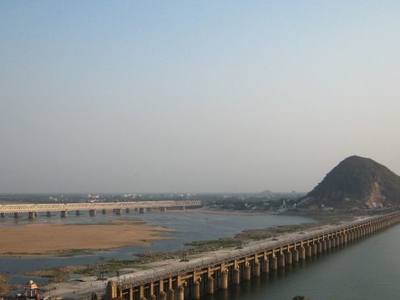 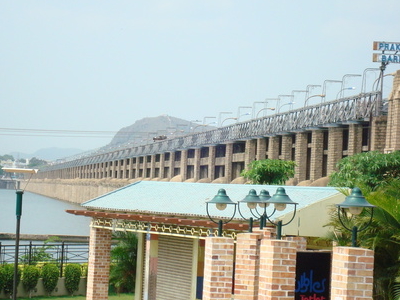 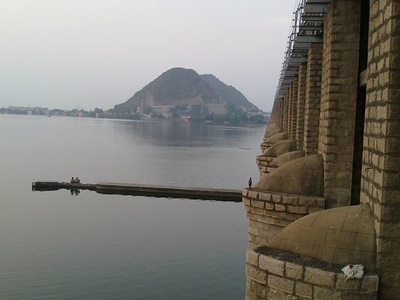 The structure of the Prakasam Barrage stretches 1223.5 m across the Krishna River connecting Krishna and Guntur districts. The barrage serves also as a road bridge and spans over a lake. The three canals associated with the barrage run through the city of Vijayawada crossing it and giving it a Venetian appearance.

The idea of constructing a dam across the river Krishna dates back to 1798. It began in the hands of captain Buckle and was revised in 1839 and 1841 by captain Best and captain Lake. After the endorsement of Major Cotton, the board of Directors of East India Company approved it on 5 January 1850.

The dam was started in 1852 and completed in 1855. Later, the State Government constructed a bridge that was named after Sri Tanguturi Prakasam, the first Chief Minister of Andhra (A State formed in 1953, which later became Andhra Pradesh in 1956 after the merger of Telugu speaking districts of former Hyderabad State).Completed in 1957 it helps irrigating over 12 lakh (1.2 Million) acres of land.

One of the first major irrigation projects of South India, the Prakasam Barrage in Vijayawada was completely successful in its mission.Andhra Pradesh largely owes its rich agriculture to the Prakasam dam as the project facilitated the irrigation of large tracts of farmland. The dam provides views of the lake. It has become a tourist attraction of Vijayawada.

Here's the our members favorite photos of "Dams in Vijayawada". Upload your photo of Prakasam Barrage!

Going to Prakasam Barrage? Get answers from our friendly locals