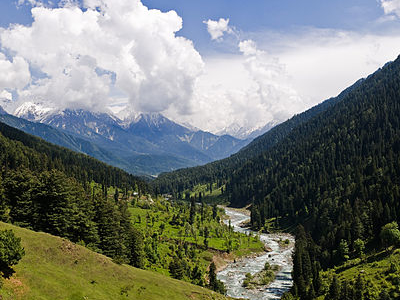 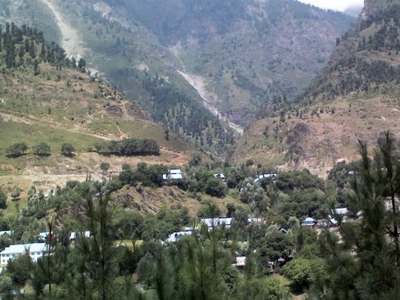 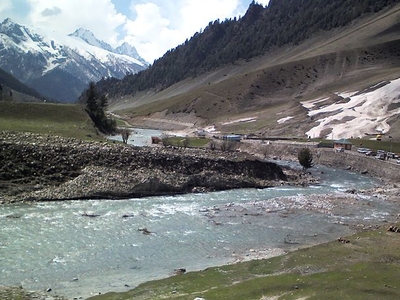 The Kashmir Valley or Vale of Kashmir is a valley located between the Karakoram and the Pir Panjal Range in the Indian state of Jammu and Kashmir. It is around 135 km long and 32 km wide, formed by the Jhelum River. Kashmir Valley is one of the three administrative divisions in Jammu and Kashmir state and consists of Anantnag, Baramulla, Budgam, Bandipore, Ganderbal, Kupwara, Kulgam, Pulwama, Shopian and Srinagar districts. Mughal emperor Jahangir called it "Paradise on Earth."

Climate:
Kashmir Valley features a moderate type climate. Its climate is largely defined by its geographic location, with the towering Karakoram Range in the north, Pir Panjal Range in the south and west and Zanskar Range in the east. It can be generally described as cool in the spring and autumn, mild in the summer and cold in the winter. As a large valley with significant differences in geo-location among various districts, the weather is often cooler in the hilly areas compared to the flat lower part. Summer is usually mild and with good little rain, but relative humidity is generally high and the nights are cool. The precipitation occurs throughout the year and no month is particularly dry.

Tourism:
Kashmir valley is a popular tourist destination for domestic (Indian) and foreign tourists. Among the popular tourist places in the valley are Gulmarg that has a ski resort, Dal Lake that has popular house boats, Pahalgam and Amarnath Temple.Before insurgency intensified in 1989, tourism formed an important part of the Kashmiri economy. The tourism economy in the Kashmir valley was worst hit.

Tourism in the Kashmir valley has rebounded in recent years and in 2009, the state became one of the top tourist destinations of Gulmarg, one of the most popular ski resort destinations in India, is also home to the World's highest green golf course.However with the decrease in violence in the state has boosted the states economy specifically tourism.It was reported that 736,000 tourists including 23,000 foreigners visited Kashmir in 2010.

Hill Stations And Mughal Gardens:
Lake:
Mountaineering:
This Himalayan valley provides a base to climb some of the challenging Himalayan peaks. These peaks where closed due to the rise in militancy, now they are opened for mountaineering.
Transport:
Kashmir valley is connected to Jammu and Ladakh regions by road and air. It has access to Jammu region and the rest of India through the Banihal road tunnel near Qazigund on national highway NH 1A.
Culture And Cuisine:
Kashmiri cuisine includes dum aloo (boiled potatoes hollowed and stuffed with heavy amounts of spice), tzaman (a solid cottage cheese), rogan josh (lamb cooked in heavy spices), yakhiyn (lamb cooked in curd with mild spices), hakh (a spinach-like leaf), rista-gushtaba (minced meat balls in tomato and curd curry),danival korme and the signature rice.

The traditional wazwan feast involves cooking meat or vegetables, usually mutton, in several different ways. Alcohol is not consumed by many Muslims in the valley. There are two styles of making tea in the region: Noon Chai or salt tea that is pink in colour (known as chinen posh rang or peach flower colour) and popular with locals, and kahwah, a tea for festive occasions, made with saffron and spices (cardamom, cinnamon, sugar, noon chai leaves) and black tea.

Here's the our members favorite photos of "Valleys in Jammu and Kashmir". Upload your photo of Kashmir Valley!

Going to Kashmir Valley? Get answers from our friendly locals

Connect with Abhimanyu Singh and Taj Irshad who have already visited Kashmir Valley.

Valleys in Jammu and Kashmir